Funko is known for their insanely popular Pop! toys, but now it looks like their heading into the cosmetic world with their first Disney-themed makeup launch.

The company is gearing up to drop a makeup line inspired by some of Disney’s biggest villains.

The makeup line is inspired by four villains — Maleficent, the Evil Queen, Ursula and Cruella de Vil. Each character had their own “line” complete with an eyeshadow palette, a lip gloss, an eyeliner and a brush. The packaging is complete to look like the Pop! Figures of the evil villains.

“Maleficent’s Thorny line is as vicious, cursed and unapologetic as the villain that inspired it, bringing a rockin’ rebel style to your fashion game. The Evil Queen’s Mirror line is as wicked and chaotic as the queen herself, the perfect match for those who take pride in being the bad apple of the bunch. Cruella de Vil’s Darling line is savage, fierce and fashionable for the fashionista without boundaries. And Ursula’s Sea Witch line has all the scheming, bold confidence of Ursula herself,” the website reads.

You can see what the makeup looks like below. 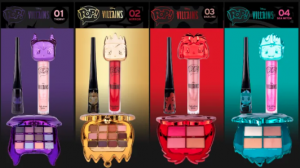 It will be available online and in Ulta Beauty stores next month.

Earlier this year, ColourPop launched their own makeup line about the same villains, with a few more added into the mix.

Funko has announced a whole line of Pop! figure s based on one of our favorite Netflix series The Umbrella Academy.

The series, based on comics by My Chemical Romance’s Gerard Way, dropped its first season this year and is currently filming a second.

Now, Funko has revealed they plan on releasing toys of all of our favorite characters. You can see their post on Instagram which includes images of all the items in the collection.

“Bring home Pop! Luther Hargreeves, Diego Hargreeves, Allison Hargreeves, Klaus Hargreeves, Ben Hargreeves, Vanya Hargreeves with a Chase, the time-jumping Number Five with a Chase and Pogo the chimpanzee. They might not be the nicest people but Pop! Cha-Cha and Pop! Hazel are still useful assassins to have around,” the website description reads of the new figures.

The website only says the toys are “coming soon,” so we’ll have to wait patiently for their release, which will at least likely be before season two drops.

What do you think of Funko creating Disney villain-themed makeup? Sound off in the comments down below!