Seized Fyre Festival merch is being auctioned off to reimburse victims

It’s been almost three years since the ill-fated Fyre Festival took place. However, new information regarding the event and its now-imprisoned founder Billy McFarland continues to pop up.

Read more: Hear Billie Eilish learn how to be alone in her new single “my future”

Fyre Festival has caused quite a media circus over the past few years. McFarland is currently spending six years behind bars for the fraudulent festival. Most recently, he tried to use coronavirus as an excuse to leave prison.

As well, various lawsuits have been thrown around. Fyre Festival co-founder Ja Rule was recently excused from a $100 million lawsuit. Back in December, blink-182‘s management company announced they are going to court over a $500,000 lawsuit against them from Fyre Festival.

Despite all of the media attention and documentary series, a lot of individuals’ lives still remain impacted by Fyre Festival. The bankrupt festival has still not paid various companies and employees.

Back in 2019, McFarland’s lawyer turned over various boxes of merchandise. Those boxes were then used to pay back some of the festival’s debt. However, it turns out that McFarland kept some of the merch for himself to reportedly sell for his own profit. The US Marshals eventually seized the remaining merchandise. Those seized items are now part of a new auction. The money from the auction is benefitting the festival’s victims.

“This Fyre Festival-branded clothing and other items that were seized from Billy McFarland were originally intended to be sold at the Fyre Festival itself,” US Marshal Ralph Sozio of Southern District of New York says. “But were kept by McFarland, with the intent to sell the items and use the funds to commit further criminal acts while he was on pre-trial release. The proceeds from the sale of these items, all traceable to McFarland’s $26 million fraud, will go toward the victims of his crimes.”

Biding and registration for the auction have begun through the vendor Gaston & Sheehan. The auction is running through Aug. 13.

There are over 126 items up for action. The Fyre Festival merch includes a festival entry wristband, a baseball cap, long-sleeve shirts, sweatpants and hoodies. There is also a souvenir token that says, ironically, “a conspiracy to change the entertainment world” on it. 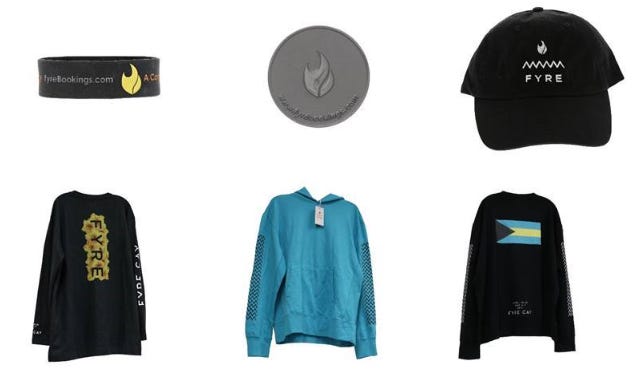 McFarland’s criminal charges include providing false financial information to potential Fyre Festival investors. The Bahamas-based music festival was advertised to include a luxurious experience with live performance. Migos, Major Lazer and blink-182 were all scheduled to perform.

In 2018, McFarland pled to two counts of wire fraud. He is currently writing a memoir behind bars with the controversial title Promythus: The God of Fyre.

Head here to see all of the Fyre Festival items up for auction.

Are you going to take part in the Fyre Festival auction? Let us know in the comments below.