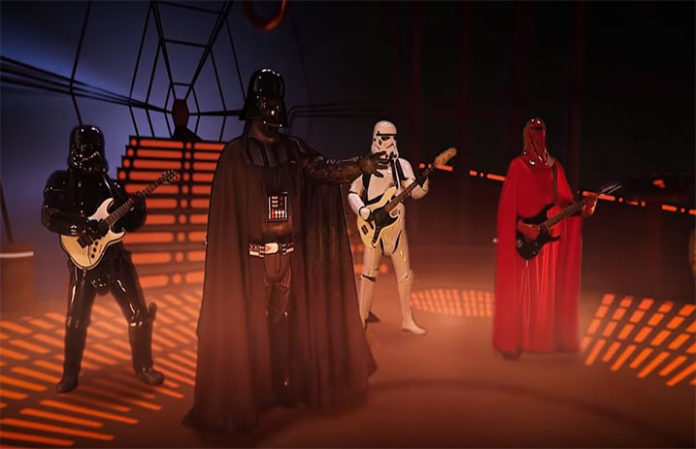 Star Wars cosplay band Galactic Empire is heading out on a summer tour that's bound to be one of the coolest tours this side of the galaxy.

Check out who's supporting and dates below!

In case you've never heard of Galactic Empire, they're a Star Wars cosplay band that released their debut self-titled album on Feb. 3 through Rise Records. Galactic Empire featured metal tributes to your favorite Star Wars songs such as “Duel of the Fates” and “The Imperial March.”

“These instruments are crude but should be adequate to shred some faces as we journey across the galaxy,” said guitarist Dark Vader when talking about their debut album.

For about the last week, Galactic Empire was doing a countdown in anticipation of this tour before finally announcing the big news on June 2. They'll be joined by dangerkids on this amazing tour.

“Loyal Citizens of the Galactic Empire, in our continuing efforts to eradicate the rebellion we are embarking on a US tour with our allies in dangerkids.
Garrisons will be set up in each city to ensure no rebel scum undermine our plans.”

Tickets are avaliable now, along with VIP packages which you can purchase here. The VIP package includes a general admission ticket, a meet and greet with the band, a photo opportunity with Galactic Empire, a limited edition poster, a Galactic Empire fidget spinner and a VIP laminate with a lanyard.

Check out the dates below and tell us which show we'll see you at!