Garbage have made their long-awaited return with their fiery new single “The Men Who Rule The World.” For the anthemic rock track, the band take no prisoners as they call out the misogyny, sexism and racism that is evident around the world.

The biting new single is off of their first full-length album in nearly five years No Gods No Masters, which arrives June 11.

Read more: 15 essential post-punk bands who represent the evolution of the genre

“The Men Who Rule The World” offers a powerful first look into Garbage’s upcoming album. Filled with funky electric guitar riffs, menacing drum beats and lead singer Shirley Manson’s distinct vocals, the track has all of the elements to become a fan favorite among listeners. As well, the truthful and unfiltered lyrics in “The Men Who Rule The World” make it the ultimate protest song.

Within the lyrics, Garbage are calling out everything that’s wrong with society. From misogyny to social injustice, the band are critiquing what they see in the world and demanding a change. As the opening track to No Gods No Masters, “The Men Who Rule The World” also represents the telling and timely narratives that are woven throughout their new music.

For Manson, No Gods No Masters is a result of Garbage trying to understand what is going on in the world. With all of the events that have taken place since the release of their latest full-length Strange Little Birds in 2016, Garbage felt now was the right time to make their next album.

Read more: 10 alternative albums by women that have influenced music since the ’90s

“This is our seventh record, the significant numerology of which affected the DNA of its content: the seven virtues, the seven sorrows and the seven deadly sins,” Manson says in a press release. “It was our way of trying to make sense of how fucking nuts the world is and the astounding chaos we find ourselves in. It’s the record we felt that we had to make at this time.”

Garbage teamed up with Chilean film director, animator and painter Javi Mi Amor to create a striking mixed media video for “The Men Who Rule The World.” The animated visual depicts specific eras throughout history from Donald Trump’s presidency to the Black Lives Matter movement. Eventually, however, the video turns into a post-apocalyptic world that literally bursts into flames.

No Gods No Masters was co-produced by Garbage and their long-time collaborator Billy Bush. Bush has worked with Garbage for almost three decades and has engineered every single one of their past studio albums.

Garbage began work on No Gods No Masters in the summer of 2018. Manson, guitarist/bassist Duke Erikson, guitarist Steve Marker and drummer Butch Vig flocked to Palm Springs where they stayed in a home belonging to one of Marker’s relatives.

Over a two-week period, Garbage hashed out what eventually became the framework for No Gods No Masters. After writing and experimenting with the new material, they took their demos and eventually reconvened in Los Angeles to finish the record with Bush.

Back in 2019, Manson revealed to NME that Garbage’s new music ended up taking her by surprise. At first, Manson tried to create material that is more cheery and lighthearted. However, the band ended up writing some of their most personal and dark songs yet.

“It’s dark, of course. But I’m not sure I want it to be,” she tells NME. “I read recently that pop music has become really dark, sad and troubled and my immediate desire was to do the complete opposite. Unfortunately, it’s just not my forte to write really upbeat and amazing pop music. I wish it was! So far, it’s all pretty personal.”

Garbage are releasing both standard and deluxe editions of No Gods No Masters June 11. The deluxe edition features eight additional tracks including a cover of David Bowie’s “Starman” which they debuted back in 2018.  Garbage are also re-releasing their cover of Patti Smith’s “Because The Night” which was originally co-written with Bruce Springsteen. The cover features Screaming Females and was put out for Record Store Day in 2013.

Garbage’s 2014 collab with Brody Dalle on “Girls Talk” and their 2015 collaboration with  Silversun Pickups’ Brian Aubert called “The Chemicals” are also included in the release. Additionally, Garbage’s 2018 song “Destroying Angels” with John Doe and Exene Cervenka is also on the extended edition of the LP.

To top it all off, the deluxe edition of No Gods No Masters also features a few rare tracks. Along with the 2017 stand-alone single “No Horses,” Garbage have also included 2015’s “On Fire” which is a B-side to “The Chemicals,” and “Time Will Destroy Everything,” a B-side to “Girls Talk.”

On June 12, Garbage are releasing a limited edition pink vinyl as part of this year’s Record Store Day drops. The exclusive pressing features alternative No Gods No Masters cover art.

No Gods No Masters officially arrives June 11 and preorders are available here. 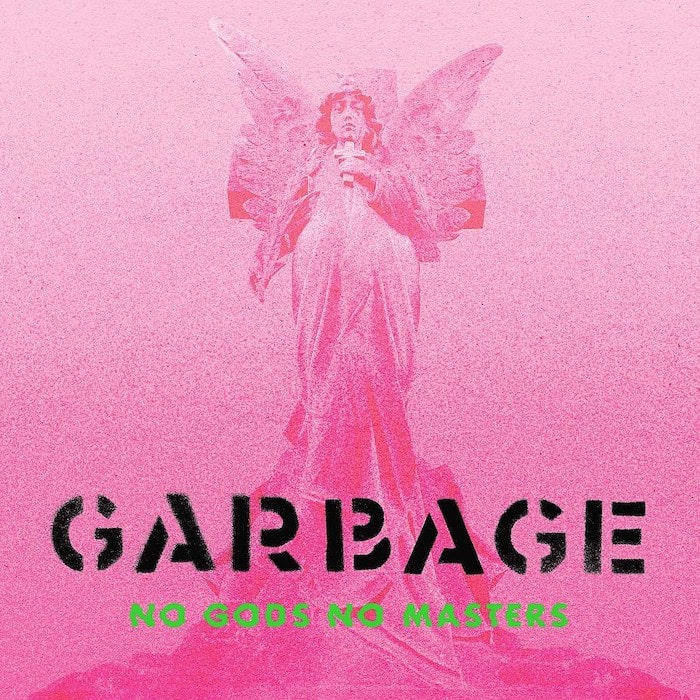 No Gods No Masters tracklist:

What are your reactions to Garbage’s new single “The Men Who Rule The World”? Let us know in the comments below.