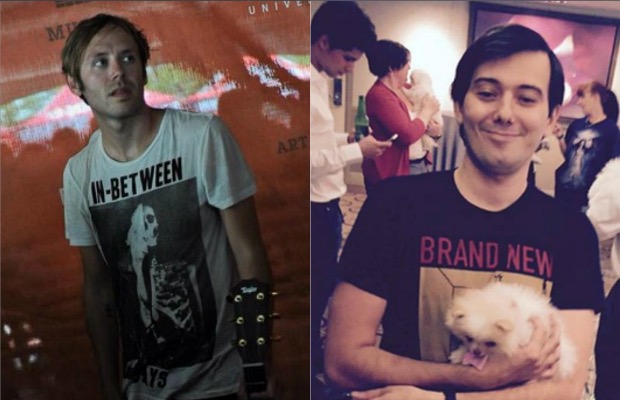 Martin Shkreli, 32, is a former hedge fund manager and current CEO of Turing Pharmaceuticals. He recently raised the price of Daraprim, which is a medication used to treat HIV and cancer patients, from $13.50 to $750 per pill. Outside of his day job, Shkreli is also a major investor in Geoff Rickly's label, Collect Records. Nothing, Creepoid and various other bands all call Collect home. Rickly is a member of Thursday, No Devotion and United Nations.

Rickly and Nicky Money of Nothing recently spoke with Noisey on the situation. “My head is still spinning, and though I want to believe that there is some reason that he would do this that is some remotely positive way, the only thing I can see is that it is totally and completely heartbreaking,” Rickly said. “ I can’t see my future at all in the label.” Money added, “Nothing will never be a part of a label that involves Martin.”

Nothing released a collective statement earlier this week, which you can read below.

“Last night I read an article about this guy who was hiking up prices on some pharmaceutics that were leaving people on their death beds empty handed due to the cost. Not soon after that found out that this guy is backing the label I'm about to release a record on.
I scoured the internet all night and early morning to try and see both sides before I made an opinion on the matter as I know how one sided people can be when there is a public lynching. But by 6 am today I literally just felt disgusted by everything and this seems to be in fact, the work of a soulless man.
I was approached by Geoff Rickley about a year ago now, about how he was starting a label. He said he really believed in Nothing and the music we were creating. We were told of a backer who was an old Thursday fan that wanted to give back to the music and arts, but literally didn't even know his name until last night. After Geoff told me his plans I really believed in him. He's a great guy and he like me had, no idea what kind of monster was funding the label and soon to be album. And like he has helped me with my problems the past few months, I plan on helping him in anyway I can as well through this all.
I'm not sure what the next step is here for us as were contractually attached to this person, but I had to share my revulsion with you all as the future is not quite foreseeable.”

Read more: “We don’t have any devotion to our pasts”—Thursday’s Geoff Rickly on his new band with Lostprophets

Creepoid also released a statement on their Facebook as the situation was taking off:

“Yesterday, along with thousands of others, we learned about the actions of a man named Martin Shkreli, who recently obtained the rights to a medication that is critical to the survival of many AIDS and cancer patients. His company, Turing Pharmaceuticals, shamelessly raised the price of this medication from $13.50/pill to $750/pill overnight.

As the events of the day unraveled, we were heartbroken to come to learn that this man was a major financial contributor to Collect Records. As you all know, we released an album with Collect this past summer. From the start we have only ever dealt with people we respected and trusted (Norman, Geoff, and Shaun) and have never met, seen or spoken to Martin Shkreli.

In the whirlwind that has followed, some details concerning the future of Collect remain very blurry (see attached link). We would like to make one thing clear – we would never knowingly work with Martin Shkreli, or anybody willing to walk across the backs of the sick and dying with a smile on their face for the sake of making a profit. As long as Shkreli is involved with Collect Records, directly or indirectly, we cannot be.

We are extremely excited about the new material we've been writing and will continue to tour exhaustively. We don't know what the future of Collect will look like but we respect everyone else there who we've worked so hard with, and want nothing but the best for each and every one of them.”

Faced with a decision that could ultimately result in Collect Records' demise, Rickly and the label have since decided to sever all ties with Shkreli. A statement released explains that they “have agreed to fully sever our relationship with Martin Shkreli, effective immediately.” Rickly added, “Never in a million years did any of us expect to wake up to the news of the scandal that he is now involved in. It blindsided and upset us on every level.” In a recent interview he further admitted, “This is going to end the career of the record label, no doubt,” he said. “If I were a band on the label I would be having a serious crisis of faith right now. The amount of money I have in the bank doesn’t cover my outstanding invoices. It’s devastating.”

With seemingly good intentions, Shkreli has said in the past, “All I did was put money in. I want to be a patron for musicians I really respect and that have a hard time making ends meet,” but regarding the label's choice to remove his involvement, Shkreli recently noted, “I don’t like it—I want to be involved in all this—but I respect their decision.” He added, “They can move forward from here. I kickstarted the company. I’m not the kind of guy that takes back a—if they can find a new investor, great, if they go out of business then it is what it is.”