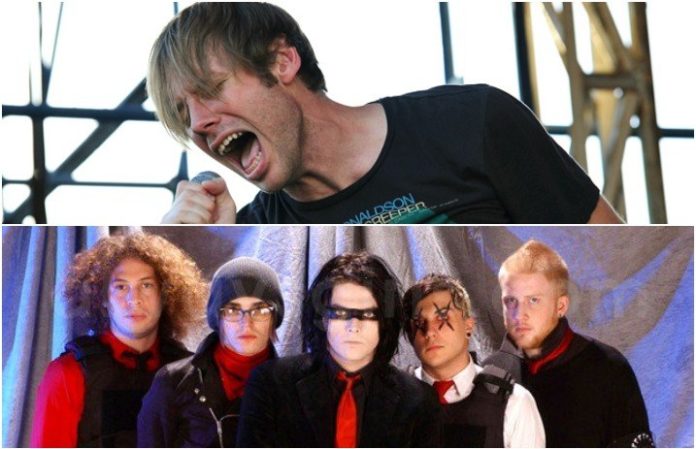 What’s that? You just learned that after all of your hard work building up your band, you’ve been offered a record deal? Congratulations! All of your problems have just begun!

Today, altpress launches Cautionary Tales And Lessons Learned, a podcast where musicians talk about how they navigated the pitfalls of the industry in the most unforgiving ways possible. Hosted by AP Editor-In -Chief Jason Pettigrew, this series looks to debunk the concepts of “success” in the eyes of upstart bands and fans who are always ready to levy the term “sellout” at someone who might not deserve it.

The podcast series launches with Thursday frontman Geoff Rickly discussing the ups and way-way-downs of traversing the DIY-punk world, into the land of major labels and back again. During the hour-plus chat, Rickly addresses his band’s relationship with Victory Records, Thursday’s rise upward to the major-label system and their return to the indies.

In addition, he also recalls how his relationship with My Chemical Romance changed when they decided to sign with a major label. Rickly produced the band’s 2002 indie debut, I Brought You My Bullets, You Brought Me Your Love, and served as a mentor figure to the band. Well, at first…

“I remember when they signed,” Rickly tells AP. “I was like, ‘Guys, you signed when you didn’t have any real success of your own. They’re going to own you. You’re never going to be able to say what you’re going to do. You’re not going to get them to push you.’ When I heard the first single, which was ‘I’m Not OK,’ I said, ‘Guys, even the single is wimpy and weird; I don’t even like it that much,’ and they were so hurt. We didn’t talk for a week, but they sent me the record [Three Cheers For Sweet Revenge] and I heard the first song, ‘Helena,’ and I was like, ‘Holy shit, why wasn’t this the single? This is pretty great.’And then I was thinking, ‘It’s a shame the label probably doesn’t care about them because this song could be huge.’”

When My Chem’s ball started rolling hard, Rickly was just as confused as to how it happened. Thursday were struggling to maintain their strict ideals in the major-label world, and it wasn’t long until MCR left Thursday in a psychic cloud of dust.

“When it started happening, it was so surreal,” Rickly recalls. “Because yes, there was this band I so condescendingly thought, ‘I helped start them. I’ve been down this road before. I know what’s going on,’ and they just became so massive at the same time Thursday was just kind of stalling, hitting walls and smashing itself against the rocks of our ideals. It was so weird: I didn’t really know what to make of it. On one hand, [I was] happy for them and then on the other, I was baffled as to what was going on with Thursday and trying to figure out what did they do that we didn’t do. And then at some point, I was able to sort of sit down and look at it and be like, ‘Wow, they did a lot that we didn’t do.’

“So then I realized that, yeah, all the stuff Thursday said we wouldn’t be and wouldn’t do, My Chem had done with a little twist of sarcasm and a trace of their own uniqueness, putting their spin on it in a way [and] saying, ‘This is what we wanted the whole time.’ I said I didn’t want it; they said they did want it…They got it; I didn’t. We both got what we wanted.” He begins to laugh. “I should be happy.”

Check out the full interview for Cautionary Tales And Lessons Learned below:

Stream it on iTunes, Google Play, Stitcher and AltPress.