It looks like a Gerard Way and Billie Eilish collaboration may happen, but not in the way you may think.

The My Chemical Romance frontman is now the owner of Eilish’s new Fender ukulele that he may record a new song with.

Earlier this month, Fender unveiled its latest collaboration with Eilish. Together, they teamed up for a signature ukulele, an instrument that Eilish has been creating music with since she was a child.

“I think the ukulele brings a different feeling to every single song, and it inspires a different kind of writing,” Eilish tells Fender. “Different instruments always make me write differently.”

Now, Gerard Way and his family are the proud owners of the new Billie Eilish uke. This week, Way took to Instagram to share the new instrument in his garden. He reveals that the uke is a gift from friend and Fender’s Head of Signature Artists Michael Schulz.

“So one of my friends, favorite people in the world, and patron of the arts, Michael Schulz, worked with his company @fender to collab with very cool musician @billieeilish on her rad looking and sounding ukulele,” he says. “They were kind enough to send this to B and Linds and myself so I wanted to post a picture of it in our garden.”

Read more: Here’s where to watch Fall Out Boy and Weezer on ‘Celebrity Family Feud’

Way further shares that he isn’t too familiar with playing the ukulele yet. However, he may eventually record his new song “Ukulele Songs” using the instrument.

“It has a really interesting pattern on it,” he continues. “And you can plug it in, so now I’m going to plug this into a fuzz pedal and see what happens. I may report back with my findings. It’s fun to play. I don’t normally play ukulele, but I did in fact recently write a song called Ukulele Songs, which is about ukulele songs. I may share that. I’m not sure, but if I record it, I will use this ukulele.”

Eilish has expressed her love for My Chemical Romance over the years. Following MCR’s reunion news in 2019, Eilish shared her excitement on Instagram.

Read more: blink-182 remind fans about that warning they gave them decades ago

FINNEAS, her brother and producer, also backed MCR’s return when he was seen wearing one of their shirts at a Grammy’s after-party.

Finneas rocking that MCR merch at the Grammys afterparty?!#mychemicalromance pic.twitter.com/PHYed0PBvz

Like Eilish, the musician saw Way’s post and expressed the duo’s love of the MCR frontman by commenting, “You’re our hero.” 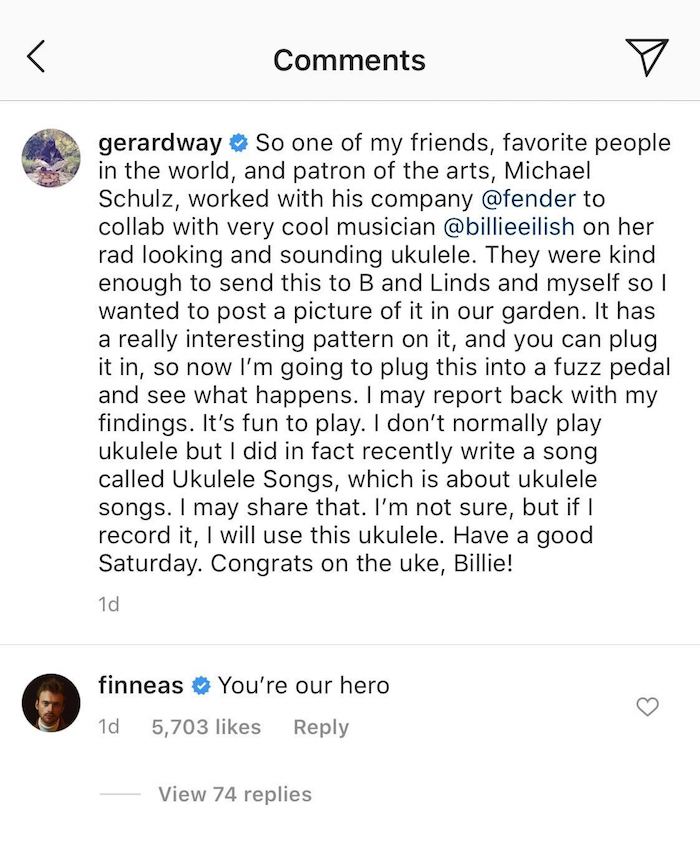 Should Gerard Way record his new song using Billie Eilish’s Fender ukulele? Let us know in the comments below.