The highly anticipated first issue of The True Lives Of The Fabulous Killjoys: National Anthem will be released Oct. 14. Fans of Gerard Way and Shaun Simon’s hyperstylized tales of neon-covered vigilantism are in for an explosive laser-beam-blasting treat. But ahead of issue 1’s release, Dark Horse Comics has announced a new must-have item for every Killjoy die-hard. Ready your bags and boards, crash queens and comic book completionists—you will want to snag this for your collection.

Read more: See which My Chemical Romance song you are based on your zodiac sign

An exclusive variant cover for National Anthem issue 1 is available in a collector’s edition bundle through Dark Horse Direct. The black-and-white variant cover is illustrated by Daniel Warren Johnson. The artwork features a bird’s eye view of the Killjoys’ car parked in a garage, surrounded by Mike Milligram and his band of Teenage Exterminators. The car’s hood is propped open and Milligram peering in with another Killjoy’s legs sticking out from underneath. Inside the car, an enormous brain takes the place of where the engine should be.

Astute Killjoy fans will also notice the similarities between Milligram’s car and the Trans Am from the Danger Days series. The two cars are nearly identical and “VAYA” is spray-painted across the door. The same American flag-inspired stars and stripes sloppily streak above the wheel well. And, most noticeably, the Killjoys’ spider icon adorns the hood. We were first introduced to the now-iconic car in the video for “Na Na Na.” It also made a more recent cameo in the My Chemical Romance tour announcement video, “A Summoning…” Now it seems as if we’ll see the return of the Trans Am once again in the pages of National Anthem.

Read more: My Chemical Romance are capturing some iconic eras with new vinyl

The black-and-white variant is limited to 300 copies and the issue is bundled with a deluxe limited-edition lithograph colored by Mike Spicer. Printed on high-quality rose-colored paper, the lithograph is perfect for framing and displaying in your Gerard Way shrine. The issue and lithograph bundle is available for $49.99. 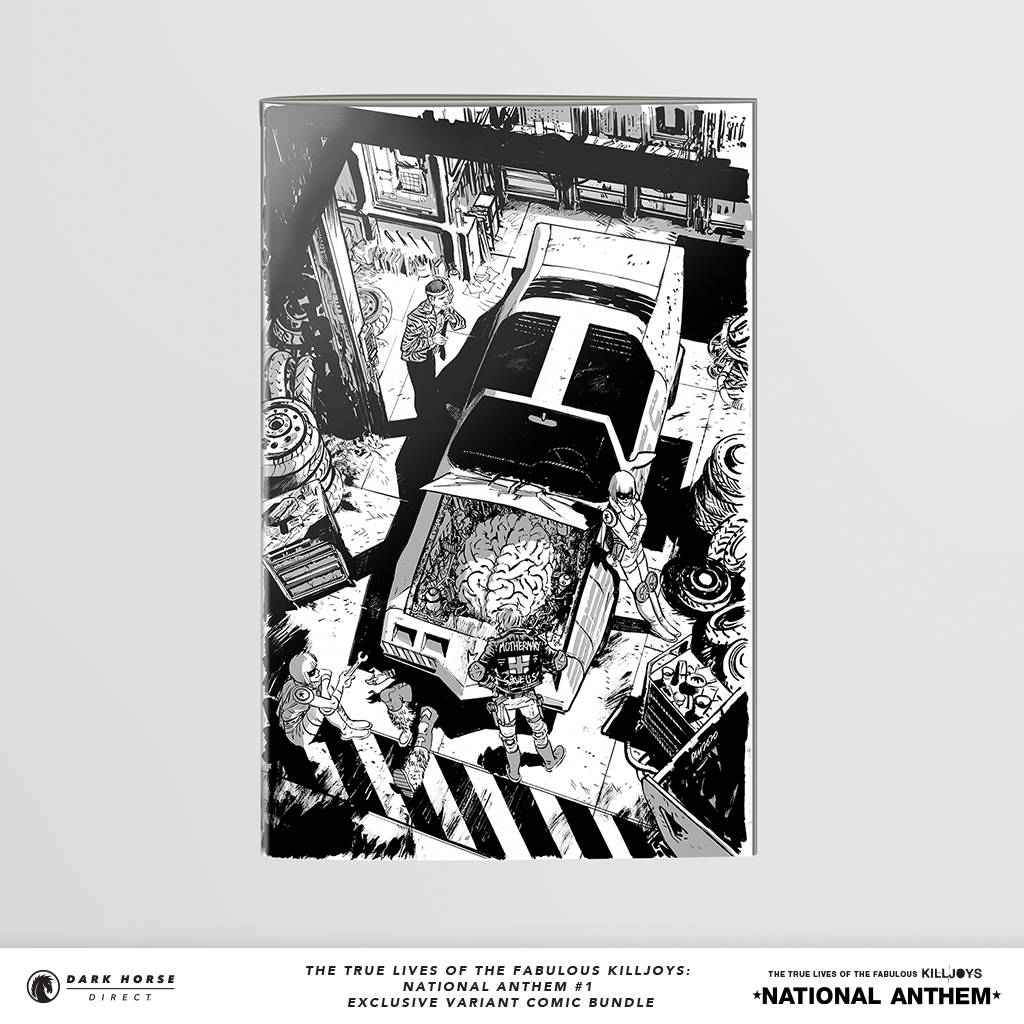 The collection is currently available for preorder here.

With National Anthem, Way and Simon promised a version of the Killjoys unlike anything we had ever seen. And this image is a striking harbinger of the bizarre surrealism that lies within its pages. Spicer’s colors absolutely scream off the print, and Johnson’s linework is sharp and crisp. This collection is the first high-end companion item for the National Anthem series.

But beyond its exclusivity and collectibility—who the hell wouldn’t want a gorgeous image of the Killjoys’ car with a brain for an engine? This cover up-thrusts the excitement for this series, which is based on Way and Simon’s original vision of the story that inspired Danger Days.

More on THE TRUE LIVES OF THE FABULOUS KILLJOYS: NATIONAL ANTHEM NO.1:

If you can’t contain your excitement to pick up issue 1 Oct. 14, Alternative Press recently provided an exclusive preview. Ten of the 44 pages of the inaugural issue are currently available for preview on the Dark Horse Comics website. Be warned—and stoked—this is a story that will truly challenge everything you think you know about the Killjoys.

At first, National Anthem seems to offer all of the familiar weirdness and ultraviolence we’ve come to expect from Way and Simon. The issue permeates with laser beams, blood spatter, cathode-ray tubes and zombie apparitions. There are car chases and shootouts a plenty. The neon locks of hair and graffiti-coated-everything all scream Killjoys.

There are visions of the gross and the spectacular. Gun-armed, drooling slug-human mutants (who strongly resemble Frank Miller’s Mutant Gang in The Dark Knight Returns) stroll through convenience stores. And the gangs of Teenage Exterminators will spark your imagination like Pop Rocks being poured into the crevices of your neocortex.

Imagine visionary auteur Wes Anderson coming up with his versions of the eccentric street gangs from the 1979 cult classic The Warriors. Add the style of a Guy Ritchie crime flick and douse it with the warped morality of A Clockwork Orange. Issue one’s introduction of the Teenage Exterminators feels like the most iconic moment of a ’70s exploitation movie. In a year that has forced us all to stay home and sanitize everything we touch, hyperviolence is a liberating treat.

But this series isn’t all bandit masks, exit wounds and rebellion. Underneath all of the spray paint lies a textured meditation of dissatisfaction and the incessant buzz of spiritual unrest. National Anthem feels like The Matrix with its coding dyed bright pink by a bottle of Manic Panic hair dye. There is an unnerving feeling that pulses through its pages, plagued by unreached potential and the sting of compromise. It forces you to confront that part of yourself that feels haunted by who you used to be. National Anthem is a threat to your accountability for your own ideals and idealism, making you question your own complacency.

The duality of the series’ lead protagonist is at the center of all of the action. Mike Milligram is a reckless, teenage-eternal antihero, entirely unrestrained and divorced from a sense of his own mortality. His alter ego, Michael Morris, is Milligram’s polar counterpoint. Lulled into a state of submission by the blistering glow of a television set, Morris is merely getting by. His Analog War days are suppressed by the monotony of a grocery store job, pacified by network programming. His only tether to rebellion comes in the form of an obsession with the Ramones.

But much like John Carpenter’s sci-fi horror classic They Live, the shiny veil that separates reality from truth becomes punctured. Morris begins to see things for what they are. He chats with hazy visions of brain-dripping figures from a vaguely familiar lifetime. Morris becomes cognizant of the gnarly underbelly of drooling deformities lurking just below the force-fed perception of his own life.

The third act of the first issue is bizarre and thrilling—like a lucid dream submerged in a tallboy of Red Bull. Some of Way and Simon’s most surreal ideas to date begin to take shape in daring new ways. The conclusion of issue one is poetic, invigorating and entirely satisfying.

Read more: 10 blink-182 memes that sum up the feeling of getting older

“Jordie [Bellaire] and Leo [Romero] are not playing it safe here, and it’s nothing short of mind-blowing to see. Their work on this book has elevated it far beyond my wildest imagination.”

If the Killjoys’ “art is the weapon” mantra still holds true, consider National Anthem to be a neon nuclear warhead. Fans eagerly awaiting a reference to Party Poison, Fun Ghoul, Jet Star and Kobra Kid may be slightly bummed. There’s no mention of the renowned Killjoys from My Chemical Romance’s Danger Days album. This story is truly something different entirely.

Where Danger Days found empowerment in self-expression and defiance, National Anthem explores a world devoid of individuality with more nuance. Morris’ life is all too relatable. Falling asleep on the couch, bathed in the glow of a late-night test pattern. Getting through life between shifts at a dead-end job. Memorizing minutiae about your favorite band just to feel alive. National Anthem focuses on the aching hums of being obedient to convenience and challenges you to point a laser beam at your own malaise.