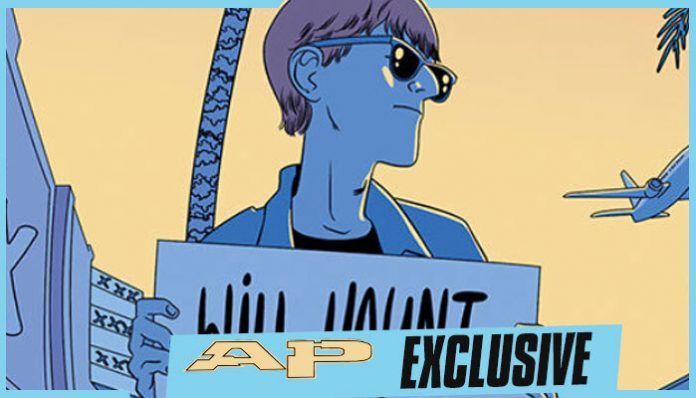 Ever since The Umbrella Academy became a massive Netflix hit, its characters have gone from indie comics darlings to household names. Anyone with a Netflix password now has the strange and unusual world of the Hargreeves primed for their viewing pleasure. Yes, we may be two seasons deep. Sure, we have three trade paperbacks of the Gerard Way–penned comics to scratch that Umbrella Academy itch. Hell, we here at Alternative Press even devoted an entire issue to the Hargreeves siblings. We’re in the trenches of full-blown Umbrella-mania—and we simply can’t get enough.

Fortunately, Dark Horse Comics will be releasing an even greater insight into the origins of The Umbrella Academy. By now, the story of the 43 children born to unpregnant mothers on Oct. 1, 1989 is as ubiquitous as the murder of Bruce Wayne’s parents. However, the teenage years of the Hargreeves kids have been strictly reserved for flashbacks and veiled by allusions in dialogue. You Look Like Death: Tales From The Umbrella Academy marks the first, and most linearly extensive, look into their adolescence yet.

Written by Gerard Way and Shaun Simon and illustrated by I.N.J. Culbard, the story will be presented as a six-issue miniseries. The first installment will be released Sept. 16, but Alternative Press was given an exclusive sneak peek before it hits shelves. That’s right. We got to read it early…and we didn’t even have to use a Ouija board. If the rest of the miniseries is anything like issue one—drop everything and get all six issues put on your pull list now. Here’s a spoiler-free preview of the first issue.

You Look Like Death follows an 18-year-old Klaus Hargreeves, aka Number Four, aka The Séance. His distinct angst and flamboyant bravado is in full swing and coupled with the bullheaded indifference that comes with being 18. Literally floating through an endless bender, Klaus’ sarcasm and nihilism are wildly unbridled. His drug use, recklessness and steady summoning of transient phantoms are deemed a liability by his father, Sir Reginald Hargreeves. Sir Hargreeves kicks Klaus out of the Academy, revokes his allowance and excommunicates him from the family.

Read more: Another one of MCR’s ‘Black Parade’ songs has been certified silver

After some quick cameos from his siblings, Klaus leaves the Academy while levitating on luggage and heads for The City. The freshly expelled Klaus is left to fend for himself for the first time. We’re treated to Klaus using his powers in a way that is far more casual than anything we’ve seen before. This period of Klaus’ life seems to precede the total mental anguish that comes as a byproduct of using his powers. He has seemingly yet to be burdened by the relentless miasma of speaking to the dead.

Life, and death, still seems like somewhat of a party. And, in his ever-persistent search for a high, he finds himself in big trouble with a vampire drug lord. After a brush with The Void, he comes to the realization that he can no longer rely on his siblings to bail him out of trouble. Klaus heads for Hollywood with the vampire drug lord on his trail and, again, uses his powers in an extremely garish way.

Read more: Which Hocus Pocus character are you?

With You Look Like Death #1, Way and Simon establish a story structure that has yet to be used in the TUA comics. Gone are the brisk flashbacks of the events that lead to the Hargreeves’ lifelong emotional turmoil. Instead, we experience a cohesive, and so far linear, telling of the trauma of Klaus’ teenage years. But it’s not all gloom and doom. In fact, issue one is quite the contrary. Neon signs, dance parties and a club with a name that only Way could come up with set the tone.

The inaugural Umbrella Academy spinoff has a completely different vibe than the rest of the comics. This story feels less superheroes-in-a-psych ward and more like the Tarantino–written drug-hustle road movie True Romance. There are even shades of Paul Thomas Anderson’s grimy take on the seedy glam-noir of Hollywood in Boogie Nights. All in all, this series truly feels less like an Umbrella Academy adventure and more like a surreal gonzo romp that is perfect for Klaus’ first solo story.

Mainstay Umbrella Academy illustrator Gabriel Bá provided a variant cover for the first issue, but Culbard is the lead illustrator for the series. Culbard is best known for illustrating adaptations of works by H.P. Lovecraft and Arthur Conan Doyle. His style is less angular and more directly rooted in traditional sci-fi than Bá’s, which provides a dramatically different look for the characters. Culbard’s approach to the material feels less exaggerated and more realistic than the style we’re accustomed to seeing in titles such as Apocalypse Suite and Dallas. You Look Like Death looks clean and contemporary. It glows with the minimalistic sheen of manga while retaining a color-bombed pulp-noir grit. Way also employs his Killjoys co-creator and collaborator Shaun Simon as a co-writer, marking Simon’s first foray into the Umbrella Academy universe.

You Look Like Death issue one is currently available for preorder on the Dark Horse webstore. Along with Bá’s cover, two variant covers are also available—one illustrated by Culbard and the other by Leo Romero. This miniseries is a can’t-miss for Umbrella Academy die-hards and Way completists. It also provides a perfect gateway into the world of the Hargreeves for those somehow still uninitiated.

With The Umbrella Academy hype at its fever-pitched, Netflix-powered apex, it would be easy to pump out cash-grab issues with the intention to exploit the hype. But You Look Like Death never panders to its audience or waters down the originality of the series. Instead, Way and Simon venture into new territory and take stylistic risks that feel daring while simultaneously logically appropriate. Just when the world at large fell in love with The Umbrella Academy, we’re given a story where one of its members is completely exiled. Say goodbye to your expectations. You Look Like Death proves that this franchise is too bizarre and imaginative to predict.

Will you be grabbing the first issue of You Look Like Death? Let us know in the comments below.