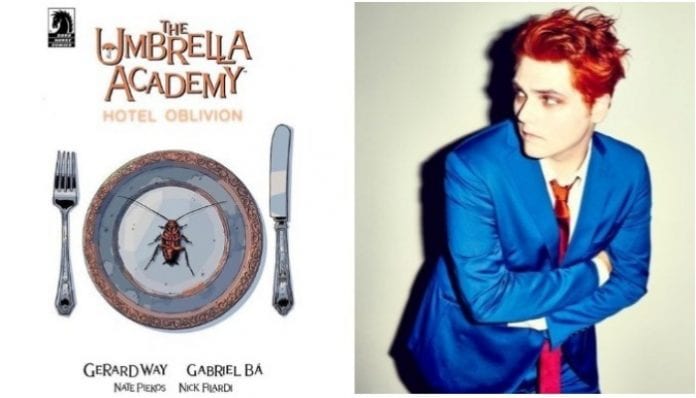 The release date of the Netflix adaptation of Gerard Way’s comic series, the Umbrella Academy, has finally been announced. While at New York Comic Con, My Chemical Romance’s frontman also shared a first look at the series.

The Netflix series was originally thought to be released this year in 2018. However, the series’ slated release was pushed back to 2019, according to a series of Twitter posts. Today, Netflix’s the Umbrella Academy has an official release date of Feb. 15, 2019.

The announcement that Umbrella Academy was coming to Netflix was made in July of last year. The live-action comic book adaptation is set for a 10-episode run.

The story follows “A dysfunctional family of superheroes that come together to solve the mystery of their father’s death, the threat of the apocalypse and more,” according to the Netflix summary.

“I am thrilled that the Umbrella Academy has found a home at Netflix,” Way says according to Deadline. “I couldn’t think of a better place for the vision Gabriel Bá and myself had when creating the comic and cannot wait for people to experience that world as a live-action show.

Get a first look of some behind-the-scenes shots below.

Additionally, the Umbrella Academy released promotional shots of the cast in costume. Check them all out below.

Super famous. Super over it. No. 3 ???? Allison Hargreeves. #UmbrellaAcademy pic.twitter.com/fouF4v7XRj

Way also announced that the third installment in the Umbrella Academy comic series, Hotel Oblivion is out in stores now. Way shared a short trailer on Instagram to debrief fans on what to expect of the latest installment.

“I’m having a hard time containing my excitement over the fact that something named ‘oblivion’ is actually the start of so many new things!” Way writes. “It’s a story about time and age and mistakes and redemption.”

Are you excited for Umbrella Academy to hit Netflix? Sound off in the comments below.