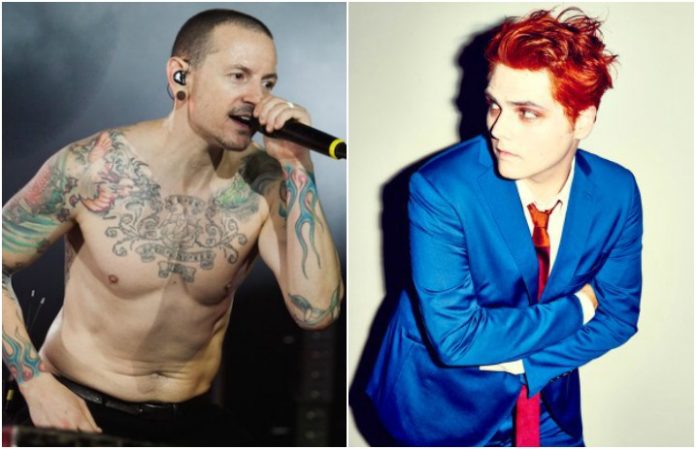 “I was devastated to hear about Chester,” Way said in an interview with Nerdist.

In the interview, Gerard Way remembers meeting his wife, then Lindsey Ballato of Mindless Self Indulgence, while My Chemical Romance was out with Linkin Park and MSI on the Projekt Revolution Tour in 2007.

“I was devastated to hear about Chester. He was actually at my wedding. Not a lot of people were there because we got married super quickly at the end of the tour when half the people had gone home. So there were literally only 30 or 40 people there, and he was one of them.”

Way continues, “His band and bringing us on tour, that changed my life. I met my wife. We have an amazing life now and a daughter. My memories of that period and meeting Linds again are tied into Chester and his band. It’s so sad. I think a lot about mental health and it’s something I’ve always wanted to address in Doom Patrol, so I definitely think we’ll see a lot more of that now. I’ve been through depression, dark times, and therapy. I can really apply that stuff to these characters.”

In a recent tweet, Lindsey Way expressed a similar sentiment, saying that Bennington “will forever be linked to some of [her] fondest memories.”

fell in love and got married on tour with @ChesterBe and @linkinpark. He will forever be linked to some of my fondest memories. So sad

Initially reported as a suicide, it has now been confirmed by the L.A. County Coroner that Bennington died by hanging, according to Billboard. He was 41. Coincidentally, Thursday would have been Chris Cornell's 53rd birthday—the Soundgarden and Audioslave frontman died by suicide earlier this year, and Bennington and Cornell were reportedly close friends.

Musicians, fans, friends, and bandmates have been expressing their grief on social media since the news of Bennington's passing broke.

Our thoughts go out to the Way family, the Bennington family, and everyone who has been affected by this tragic loss.