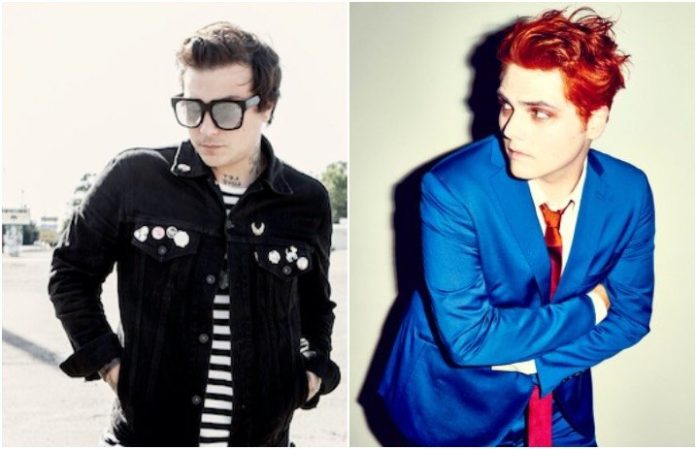 Gerard Way has been busy at Thought Bubble, a comic convention in the UK for the past couple days, doing panels and signings and generally being adorable. He has also been taking a lot of pictures with fans at the convention, which just so happened to coincide with Frank Iero And The Patience's UK tour. One lucky fan didn't meet Gerard at the con, though—she spotted him out in the world, with an old friend.

Yes it is 2017 and one of the only fan pictures with both Gerard Way and Frank Iero has surfaced! A fan named Sofia, (@very_dark_orca on Twitter), attended both Frank Iero And The Patience's show in Leeds and Thought Bubble, according to her Twitter, and as if we weren't already jealous, she happened upon 50% of My Chemical Romance together and snapped this pic!

Both of the guys are sporting new haircuts and facial hair and look like the coolest dad gang ever. Presumably, they'd found out they were in the same city and had met up to hang out for a while when Sofia found them. Congrats to her, we could not be more jealous.

Check out some of our favorite pictures fans snapped of Gerard Way at Thought Bubble!

Had an amazing time volunteering at @ThoughtBubbleUK this weekend! �� Got to meet @gerardway which was awesome! �� pic.twitter.com/xBNhs1VtNT

That last girl is all of us.

PART THREE I got little doodles from each YA member, as well as signatures on my mixtape comic, and I also met Alex Norris who signed the FIATP comic I created inspired by his style of comics! . #gerardway #thoughtbubble

Gerard even picked a song for one fan's wedding!

The moment @gerardway picked a song for our wedding, something I've never even dreamt of, can't explain how lucky I feel ☺️

Has the Frank and Gerard together image saved 2017 for you, too? Or does it just make you miss My Chemical Romance even more? Sound off in the comments below!