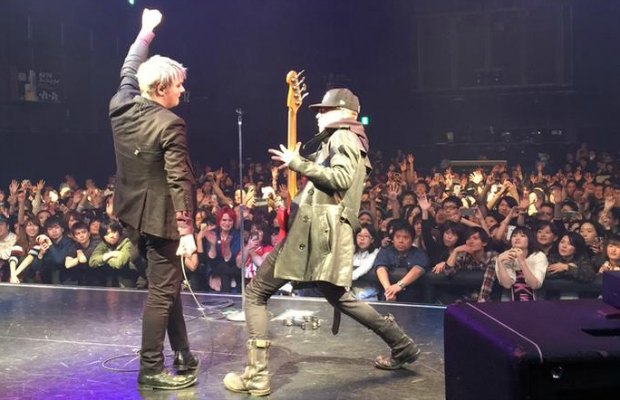 The brothers Way (one-half of My Chemical Romance) reunited onstage at today's Gerard Way And The Hormones show in Tokyo.

Mikey Way, who is nearly one-year sober now, took up bass for “Don't Try,” an unreleased song originally recorded for Hesitant Alien, which made its live debut last month in England.

“So proud of my brother for getting on stage nearly 1 year clean and sober,” Gerard tweeted post-show. “Demons vanquished. Rock lives.”

“I can't thank you enough,” Mikey responded. “I was honored and blessed to be able to share the stage with you and the hormones tonight. Rock lives!”

Watch the video of today's performance, which ends with a heartfelt hug and Gerard's promise that he will return to Japan soon, below:

UPDATE: Here's a closer view of the action:

Last November, Mikey opened up about his struggle with addiction and subsequent treatment, noting then that touring was something he needed to put on hold for his mental health.

“Touring was just not something I was ready for or wanting to do,” he wrote. “I was going along with everything up to that point because that is what I had always done. But, I no longer want to be that person, and I am trying to learn to say no and to put myself, and my mental health first. Will I ever tour with EC… maybe? Where I am in life right now, I want to continue to create and release music.”

We, for one, are glad to see  him onstage again.

Someone showed up for a very special show tonight in Tokyo

In case you missed it, Mikey's Electric Century recently debuted their second single, “Let You Get Away.”