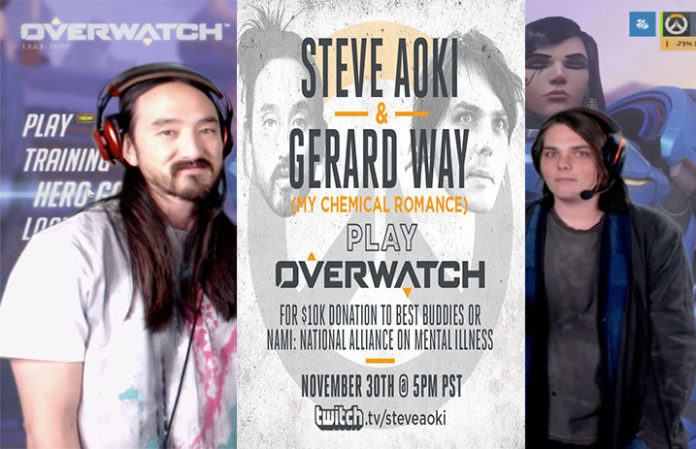 My Chemical Romance's Gerard Way and Steve Aoki faced off in Overwatch on Nov. 30 for charity. Aoki was playing for Best Buddies, while Way was playing for for the National Alliance on Mental Illness. Check out some of our favorite moments below:

Steve Aoki admits that he's rooting for Gerard Way in the matchup (So were we!):

Steve Aoki talks about liking Soldier 76, and talks about how he'll use his Call of Duty experience while playing:

Gerard's favorite character is D.Va and also likes the fact that she's a professional gamer. Is anyone surprised?:

Gerard shows us his gaming prowess and goes on a nice kill streak even without D.Va's mech suit:

A fan wanted to know if Gerard likes chicken and well.. he lets us know:

Gerard talks about when his next album might be:

Gerard talks about some of the comic books he's working on:

Gerard lets Steve know how much he liked the remix:

Steve Aoki tells Gerard how much he likes the “Welcome to the Black Parade” music video:

At the end, Aoki pulled off the win and the $10,000 donation went to Best Buddies. One thing is definitely clear, these two need to stream together for charity again.

Watch More: Forgotten Facts About THE BLACK PARADE by MY CHEMICAL ROMANCE