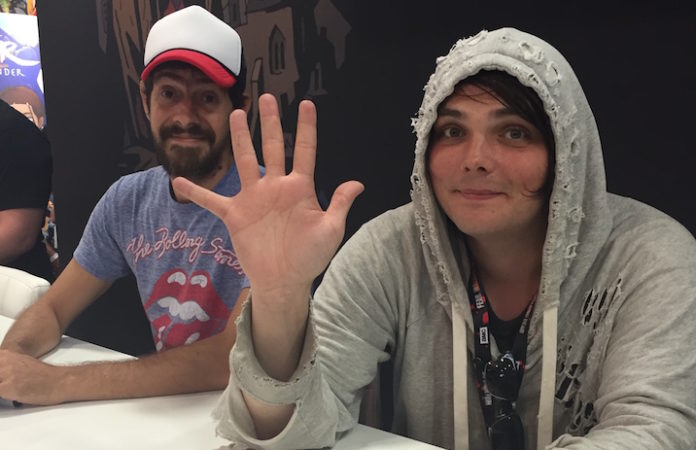 When he walked the floor last year, Tony Perry was still recovering from the mountain bike accident that prevented him from joining the rest of Pierce The Veil on Warped Tour. But this year he was able to enjoy his visit to San Diego Comic Con with both arms fully able to carry around his loot.

The day after PTV rocked the MTV Fandom Awards at nearby Petco Park, the San Diego based guitarist was at the Convention Center taking in all of the Star Wars, Teenage Mutant Ninja Turtles and other fan franchise related goodies the massive pop cultural gathering had to offer.

Perry wasn't the only AP-friendly musician onhand at SDCC.

Gerard Way returned to the Dark Horse Comics booth for a signing alongside his Umbrella Academy collaborator Gabriel Bá.

Also on Thursday, the same night as the MTV Fandom Awards taping, thrash metal legends Slayer played a special show at the San Diego House Of Blues, unleashing classic Slayer anthems like “South Of Heaven” and “Angel Of Death” along with material from their latest album on Nuclear Blast Records, Repentless. The band was in town to promote their new comic book with Dark Horse, a three-part series based on the new album.

Metallica's Kirk Hammett returned the following year where he joined his former band Exodus onstage as a special guest.