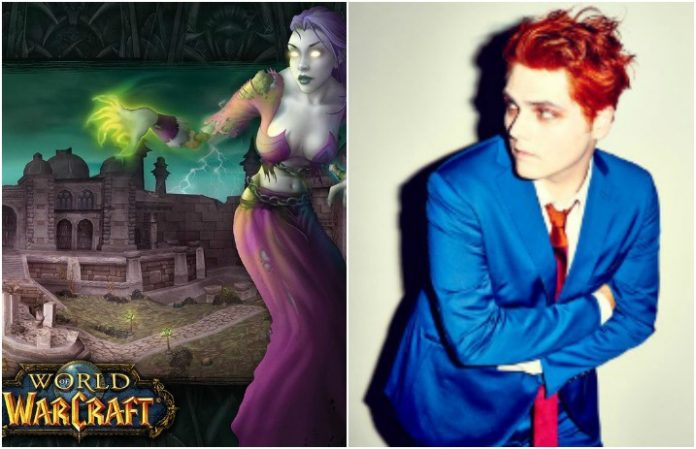 In a new interview with Geek and Sundry, Gerard Way talks about Umbrella Academy and how he had to quit the ultra popular MMORPG World of Warcraft.

Anyone that's ever played World of Warcraft knows how addicting it can become, whether you're focusing on PVP or late-game raiding, but it actually became so addicting for Gerard and the rest of the My Chemical Romance crew.

“I was in New Zealand when I finished Issue 6 of Apocalypse Suite. I’d done almost the whole comic and I quit Warcraft.” The rest of The Wednesday Club laughed along with Gerard and joked that quitting the game “saved his life” to which he agreed.

It actually turned out that the WoW craze didn't just affect Gerard, but the entire MCR band excluding Frank. Gerard mentions how Frank played it once but couldn't really get into it, but the rest of the band including Ray Toro, Bob Bryar and Gerard's brother, Mikey.

“You get to like an arena, and the first order of business and Bob was always really good about this, he'd be like 'we need strong internet.' He would do whatever it took. Sometimes we had wires going from the other end of an arena, all the way to where we were, so he could plug a router in.”

And in case you're wondering what race and class Gerard played, he remarked that he played a “lady undead fighter.” Now by fighter, we're not sure if he means a warrior or a rogue, but we'll let that slide. For the Horde!

You can watch a clip of him talking about his WoW addiction along with how he got the band Thrice involved as well below, thanks to @njcoatcore!

Guys. GUYS. G U Y S. @gerardway TALKING ABOUT PLAYING WORLD OF WARCRAFT WHILE TOURING WITH MY CHEMICAL ROMANCE pic.twitter.com/7PWZfEGpgQ

It ended up being a pretty good to trade World of Warcraft for finishing Umbrella Academy considering that Netflix has given the series a 10-episode, live action series, slated for a 2018 debut.

“I am thrilled that The Umbrella Academy has found a home at Netflix,” Way said, Deadline reports. “I couldn’t think of a better place for the vision Gabriel Bá and myself had when creating the comic and cannot wait for people to experience that world as a live-action show.”

You can watch the entire interview with Gerard if you're subscribed to GeekAndSundry on Twitch here!

Have you ever been addicted to a video game and had to stop due to real life responsibilities? Let us know in the comments!