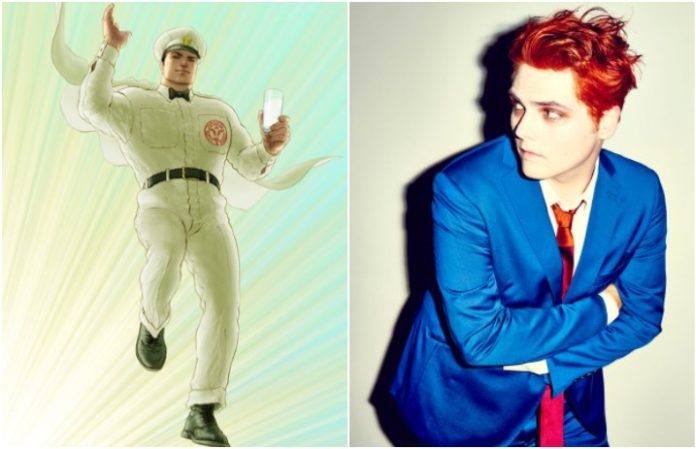 Gerard Way's Young Animal imprint was started over a year ago, but the characters from the books are about to meet other DC Universe legends for the first time in a crossover event that Gerard Way has titled Milk Wars. Obviously.

For Milk Wars, characters from each of the Young Animal books, Doom Patrol, Shade the Changing Girl, Mother Panic, and Cave Carson Has a Cybernetic Eye will be paired up with DCU characters like Batman, Wonder Woman and Swamp Thing. The story centers around a new character, Milkman Man.

The first chapter of Milk Wars will be the Justice League/Doom Patrol special coming in January with cover art by Frank Quietly, interior art by ACO, written by Steve Orlando and Gerard Way. The other pairings will be Mother Panic and Batman, Shade The Changing Girl and Wonder Woman, and Cave Carson and Swamp Thing, before returning in the last chapter to JLA and Doom Patrol.

MILK WARS! Our first DC Young Animal crossover event! Characters from the Young Animal world will be teaming up with characters from the DCU in what could only be a crossover Young Animal style. Starts in January. Cover by the brilliant Frank Quietly and interior art by ACO. Written by Steve Orlando and myself. Extremely excited for this. Milk Wars: Chapter 1 is JLA/Doom Patrol Chapter 2 is Mother Panic/Batman Chapter 3 is Shade The Changing Girl/Wonder Woman Chapter 4 is Cave Carson/Swamp Thing Chapter 5 is Doom Patrol/JLA #DCYounganimal #DCComics #MILKWARS #JLA #DOOMPATROL #NYCC

We couldn't be more happy for Gerard Way and his accomplishments in the comic world. And we can't wait to find out more about Milk Wars!

Are you excited for a Young Animal/DCU crossover? Sound off in the comments below!