Ghost just dropped a video for their new single “Kiss The Go-Goat” that dives back into the ‘60s with its psychedelic flair and obvious use of mop-top wigs.

The video starts with Papa Nihil reminiscing about his past and complaining about the Cardinal Copia era’s lack of Grammys to Sister Imperator.

“Why can’t I have another chance?” he asks before the video heads back in time to the ‘60s where he’s seen performing the new song with a messy wig on.

The grainy video matches the song’s ‘60s sound that’s undoubtedly catchy. We see the younger version of Papa Nihil being a heartthrob during his performance at Los Angeles’ iconic venue Whiskey A Go Go.

The video ends with the present-day papa asking for a rerelease of Seven inches of Satanic Panic to celebrate its 50th anniversary.

Now it looks like the video actually has some truth to it, as the band revealed via Facebook that the new song will be released on a 7” vinyl along with another new track called “Mary On The Cross.” It is available to order here.

You can see the cover art below. 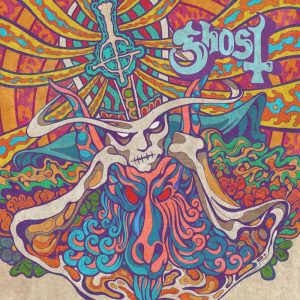 The band shared the new video on Twitter saying that Papa Nihil was “feeling particularly nostalgic as of late”.

[MESSAGE FROM THE CLERGY]

We wish to inform you Papa Nihil has been feeling particularly nostalgic as of late…Chapter 8 is available now for your viewing pleasure. https://t.co/oUyorCrNJ1 pic.twitter.com/SSVgZpBHnY

You can see the new video for “Kiss The Go-Goat” below.

Ghost will be performing an arena tour in the UK and Ireland later this year. Check out those dates below and grab tickets here.

Ghost frontman Tobias Forge spoke to Mitch Lafon last month about people who claim they are only popular because of their imagery. He said if the band put out music that was truly bad “we would not have been here.”

Forge was asked about the importance of the band’s imagery and explains the band’s music was catching on in underground scenes long before anyone knew what they looked like.

While the imagery of the band has become equal to the music itself, the musician explains that while it’s a lot of work to put together their stage set up, the music is still just as important.

“I’d say that if we had a real kick-ass image – if the image here was great, we had the bombs and the fire and all that… but if the song stunk, we would not have been here,” says Forge. “For me, they go in tandem. For me, it’s, like, my work, my job is to write cool songs for Ghost and we package it in this awesome sort of theatrical show. I don’t spend much time trying to overanalyze that. It is what it is, I just try to improve it.”

You can watch the entire interview in the player below.

What do you think of the new Ghost music video? Sound off in the comments down below!