Seeing rapper Ghostemane live is typically a chaotic experience but his show last night (November 19) was more chaotic than usual.

The rapper’s show was canceled after opening act Horus the Astroneer (also Ghostemane’s brother) allegedly got in an altercation with venue security and their sound tech.

Attendees say Horus “talked shit” and “threw a temper tantrum about” the venue’s sound tech. This led to security allegedly taking him outside of the venue ending with Horus’ nose being broken.

Other attendees are saying that as a result, Ghostemane threatened to shoot up the venue.

Skipped work, spent 3 hours on the road, payed $120 on tickets just for Ghostemane to threaten he was going to shoot up the venue because his opener talked shit to the sound guy.

The other security guards beat the shit out of him, and then I think he got dragged outside. After Jesus Piece the cops showed up. Parv0 also got beat up my security in front of Ghostemane and that’s when they wouldn’t let him onstage. Might be a little out of order but yeah.

they just shut down the ghostmane show because some pussy opener ran his mouth and got jumped 🙂 pic.twitter.com/Gunke3BqsG

The venue made a post explaining their reasoning for shutting down the show, saying it was due to “a safety issue driven by an altercation and the subsequent escalating aggression inside and outside of our venue.” They are offering full refunds for the show.

Horus The Astroneer also posted his side of the story on his Instagram account which you can see below. 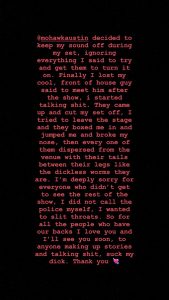 Ghostemane also dropped a new stop-motion music video for his song “Gatteka” today drawing visuals from his upcoming comic book Dr. Nihil and the Tremendous Blunder. The video “marks the beginning of a new visual era for Ghostemane as he brings the cycle for his album N / O / I / S / E to a close” according to a press release.

What do you think of Ghostemane’s concert being shut down? Let us know your thoughts in the comments below.