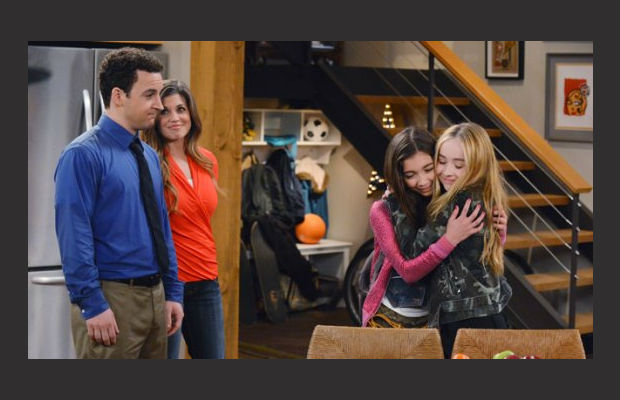 It's official: The much talked about Boy Meets World spinoff is coming to television. Disney Channel has given a series order to Girl Meets World, which centers on Riley Matthews (played by newcomer Rowan Blanchard), the daughter of Corey and Topanga, played by original cast members Ben Savage and Danielle Fishel. The series is set to begin filming this summer in Los Angeles and is expected to air next year.

Savage and Fishel will also be reunited with Boy Meets World creator/executive producer Michael Jacobs. Fans can also expect to see William Daniels (that's Mr. Feeny to you), at least for the first episode. Rider Strong, who played Corey's rebelious best friend Shawn Hunter, and Will Friedle, who played Corey's kooky older brother Eric, have been spotted on set as well.

Girl Meets World is set in New York City and follows seventh grader Riley and her best friend Maya, played by Sabrina Carpenter, as they navigate middle school. (Sound familiar?) Cory works as a history teacher at the girls' school, and Topanga owns an after-school hangout.

Here's what Jacobs had to say about the show in January to The Hollywood Reporter: “The appeal to me was exactly the same appeal that I had in doing the original, which is that I look around at the landscape and I look at my children and what is on television for them, and there are very few shows that are like this, what we aspire this show to be… The thing that delineates this show is that I don’t want this to be anything except the natural experience of actually growing up in this current world… The stories we intend on doing are stories about a real girl who is coming of age. The beauty of this show is the girl will have two parents whom the world has already watched come of age and their natural confusion in the next step of Cory and Topanga’s own evolution: being parents. I’m looking at what the condition of the world is right now for kids who are growing up, and if we can offer the same sort of guidance and entertainment that Boy Meets World offered, then the show is a good thing to do right now.”