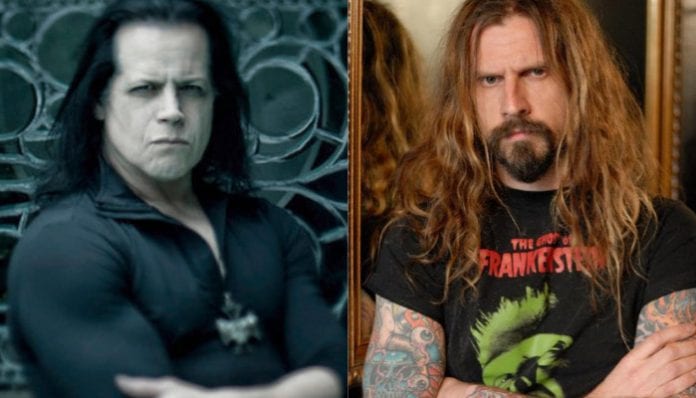 Glenn Danzig‘s got a horror film in the works, and he tells Revolver in a new interview that he took a sole piece of movie advice from none other than fellow death-rocker-turned-slasher-auteur Rob Zombie. Talk about a meeting of the minds! What movie-making wisdom do you think the White Zombie founder shared with the Danzig frontman?

“Don’t get involved!” laughs Evil Elvis himself when asked what sage splatter-flick guidance Zombie offered the burgeoning director.* For, you see, Danzig’s currently developing a horror anthology picture that’s similar to the original “Black Sabbath with Boris Karloff” or “Trilogy of Terror with Karen Black as the lead in the three different stories,” he says.

And who better to spare counsel than Zombie when one’s just beginning the journey from frontman to filmaker? Reaching back to the past, Danzig recalls his attraction to scary movies of substance over ones that buried the horrifying lede.

“I related more to those kinds of movies. Of course, there were movies I hated because you only get to see the monster in the last two minutes of the movie. But I saw the correlation between society and the monster and why there was a need for a monster.”

Elsewhere in the article, Danzig compares working with musicians to working with actors, telling Revolver he carries a no-nonsense attitude whether he’s onstage, on set or in the studio. (But no word on how he acts inside his bizarre house.)

“So far my experience has been pretty good. Anybody who’s hard to work with, I’ll just kick off my set. We’ll see when we start doing the movie and I have multiple actors everywhere. We’ll see how good my temperament is.”

The veteran rocker released his eleventh LP under the Danzig name, Black Laden Crown, last year. It contained the single “Devil On Hwy 9.” He also continued his fruitful reunion with the Misfits. But we’re still waiting on Danzig Sings Elvis.

* We’re taking it at face value that the Danzig quote (“Don’t get involved!”) means Zombie at one time literally urged the artist not to attempt making feature films, not that Danzig was warning the reporter off of the question itself. (Right?…ah, the beauty of interview transcription.)