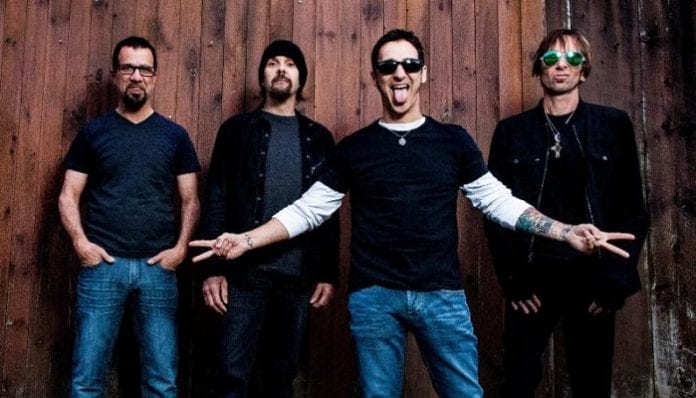 Godsmack have honored fans with a video for their ballad “Under Your Scars,” which they revealed is actually inspired by Lady Gaga.

The track, which inspired the band to launch the Scars Foundation, was just released with a special video that shows how much the fans mean to the band.

Read more: Being As An Ocean return with truly epic video, “Play Pretend”

“‘Under Your Scars’ has become such an important song to me for so many reasons,” frontman Sully Erna said. “It’s the first time Godsmack has decided to put this kind of a ballad on an album, which was pretty ballsy for us. I’m so happy that the fans have embraced it in the way they have, because the meaning behind it is so much bigger than any of us.”

He then went on to discuss the inspiration behind the song, which is the fans.

“It reminds me that taking all the credit without acknowledging the people or events that have touched our lives deeply enough to inspire songs like these, and so many others would just be wrong,” he said.

“So humbly I will say, this song came to me shortly after I had spent some quality time with someone who I consider a dear friend, and have grown to admire and respect as one of the smartest and most talented artists today, Stephanie Germanotta, who most of you may know as Lady Gaga.”

He elaborated, saying it was their friendship and the way she impacted the singer’s life.

“In the short amount of time we hung out, she made me realize that we all have these imperfections, these wounds that we carry (whether they’re physical or emotional) that cut so deep they can cripple us,” he continued.

“These feelings leave us vulnerable, or embarrassed, or even unworthy at times. And our human nature — when they’re exposed — is to shut down, rather than embrace them and realize that not only can we overcome them, but we can also become an inspiration to inspire others to have a voice and find their inner strength to show their scars off loudly and proudly to the world. Our ‘Scars’ are nothing more than our battle wounds from life and they helped mold you into who you are today.”

He said that is the reason why the band created the Scars Foundation, a non-profit aimed at battling issues such as depression, addiction, bullying suicide and more.

“Finding acceptance, that’s what ‘Under Your Scars’ and what ‘The Scars Foundation,’ are about. We’re all imperfect–that’s what makes us perfect!” Erna said.

You can see the brand new video for “Under Your Scars” below.

Godsmack will hit the road with Halestorm this fall. You can check out the list of dates below.

What do you think of the new Godsmack video? Sound off in the comments down below!