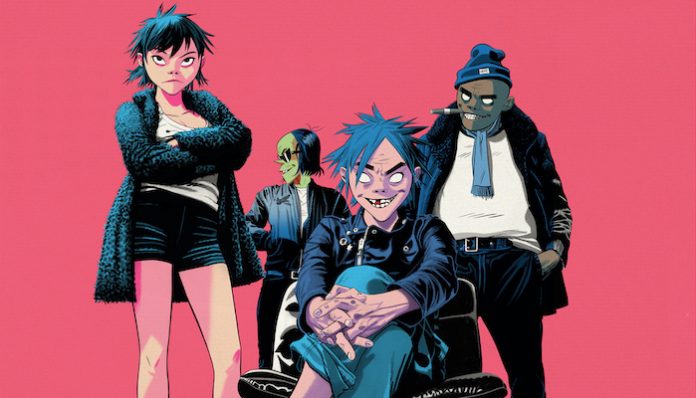 Supposedly, the cartoon group will be collaborating with U.K. rapper Slowthai and U.K. band Slaves on the new single.

The single may possibly be played on Radio 1’s Future Sounds with Annie Mac show during her “Annie Mac’s Hottest Record Of The Week on Radio 1,” on Thursday according to a tweet from The Version, which has since been deleted, and yet to be confirmed by BBC1 Radio.

The Version’s website also goes into detail by saying the possible forthcoming album will feature Slowthai and Slaves.

Advance notice! @gorillaz team up with @slowthai and @Slaves for their brand new track – and it'll be @AnnieMac's Hottest Record on Thursday!

Listen to @bbcr1 from 7pm. pic.twitter.com/HT5bi4KXw0

With all this speculation going on, the Gorillaz have yet to confirm anything. Check out the snippet below.

The Machine has been switched on 🔛
Follow your nearest Song Machine (snooze you lose)
👉 https://t.co/LxIgC7zkVH pic.twitter.com/q1vNAhqQSn

Gorillaz released a documentary Reject False Icons back in December that details the bands’ success, studio life and the artists they’ve collabed with in the past. Prior to the documentary the band also released their latest 2018 LP, The Now Now.

The brains behind the documentary is Denholm Hewlett, the son of illustrator and Gorillaz’ visual creator, Jamie Hewlett. Denholm Hewlett followed the band vigorously for three years and covered the intense process of what it took to make Humanz and The Now Now. Check out the trailer below.

With the tease of a new single, there is a chance that a new album could be in the works, which means 2020 could be a busy year for our favorite cartoon band. Known for collabing with a handful of different artists, who do you hope to see on the (possible) new record? Let us know in the comments below!