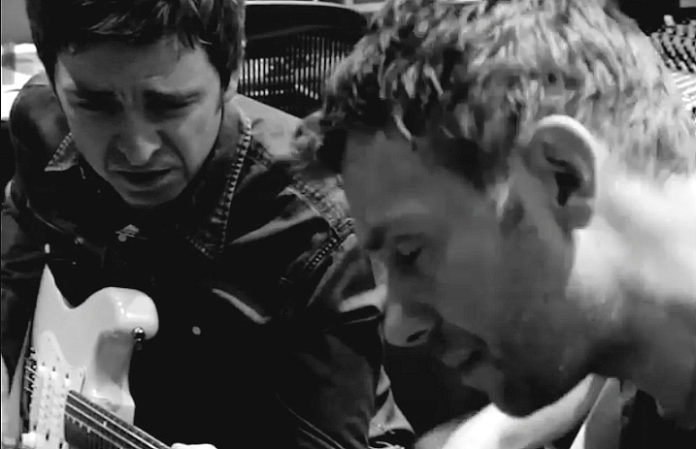 On the brink of the release of their new record, Humanz, Gorillaz have released a new, behind-the-scenes look at Damon Albarn and Noel Gallagher working together in the studio on their song, “We Got The Power.”

The band have been sharing “momentz” on their Instagram from their studio time while working on their new record, and this particular one features the former Britpop rivals.

In an interview with Vulture, Albarn and Noel Gallagher talk about what Liam Gallagher’s thoughts would be on their collaboration.

“Of course, no one’s asked Liam what he thinks about the song yet,” Albarn says. “No doubt he’d have a fantastic one-liner about what a bunch of fucking knobheads we are.”

And Noel was even more blunt: “Listen, nobody gives a fuck what Liam thinks about anything.”

The band’s new album, Humanz, is set to drop this Friday, April 28. Noel Gallagher and more will also be performing at the band’s Demon Dayz festival this summer, and Gorillaz will be headed stateside for a tour this fall.

Check out their recording footage below:

#momentz of We Got The Power with @themightyi in London #HUMANZ

And see their live performance of “We Got The Power” at Printworks in London, featuring Noel Gallagher, Jean-Michel Jarre and Savages lead vocalist Jehnny Beth.

What are your thoughts on Gorillaz’s track with Noel Gallagher? Let us know in the comments below!