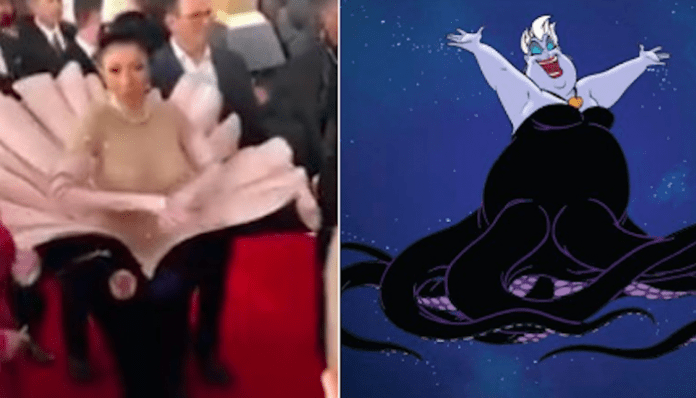 Awards shows are always full of memes, and this year’s Grammys were no different.

From Cardi B’s iconic outfit to Lady Gaga’s intense stare into the camera, there were plenty of moments at the 61st Grammys that were meme-able.

And boy, did people go crazy, Check out a few of the best memes to come out of the 2019 Grammy Awards on Sunday.

When Offset was all of us when we’re hungry.

Looking at your food in the microwave #TheGrammys #Grammy2019 pic.twitter.com/v9Pw3CUkRR

Drake’s acceptance speech where he basically came out of nowhere.

“And the winner is Drake God’s Plan”

Cardi B looked like a lot of things, but her inspo definitely seemed very Ursula.

Who wore it better, Cardi B or Ursula from Little Mermaid? #GRAMMYs pic.twitter.com/VidDTLOlDR

Katy Perry, on the other hand, looked like one of our favorite childhood snacks.

Kacey Musgraves had a big night, and her fans were not going to stop celebrating it.

Kylie Jenner’s outfit was highly contested, but she did kind of look like the kid from The Christmas Story.

Janelle Monae served so many looks, one being when she channeled Ferrero Rocher.

We love Travis Scott, but he did kind of sound like this dog with autotune.

#Grammys Offset: *Goes on stage with Cardi*
The World:  pic.twitter.com/a3ueNsiS6G

Lady Gaga was all of us when we have to send a dreaded double email.

“per my previous email” pic.twitter.com/nkAJOEkkaG

Let’s not forget when Michelle Obama stole the show before it even started.

And, of course, when Post Malone showed off his vocal chops and melted all of our hearts.

Me when I hear Post Malone singing and not rapping.#GRAMMYs pic.twitter.com/64FSkB7uRx

Check out the full list of 2019 winners here.  Also, check out what they all wore on the red carpet here.

The Grammys aired Sunday on CBS, live from the Staples Center in Los Angeles and were hosted by Alicia Keys.

See any other amazing Grammys memes? Share them in the comments!