It’s Sept. 1 which means people are rolling out the September memes and jokes that reference Green Day‘s “Wake Me Up When September Ends.”

However, Green Day fans are reminding the internet about what the song truly means and are asking that the September memes stop for good.

Read more: Freeform’s 31 Nights of Halloween lineup is full of these spooky favorites

After American Idiot was released in 2004, “Wake Me Up When September Ends” quickly became part of the internet meme culture. Listeners have taken the song’s title and created overexaggerated memes about sleeping through the month of September. Some even troll Billie Joe Armstrong on Oct. 1 about September finally being over.

how you know it’s september every year, even when you’re not a green day fan 😐 pic.twitter.com/x3B6N2ndtM

Wake Me Up When September Ends // Green Day pic.twitter.com/773VX5e6Yi

The calender: turns to September
Green day and twitter: pic.twitter.com/pQGxsnmlp8

Now, since September 2020 is here, Green Day began trending on Twitter because of the September memes. However, fans are reminding everyone about why the memes aren’t actually funny.

Read more: BMTH and YUNGBLUD’s collab “Obey” is arriving sooner than you think

For those that don’t know, “Wake Me Up When September Ends” is about the death of Armstrong’s father. Armstrong recently told Howard Stern that the song title comes directly from the words he, then a young kid, told his mother when his father died.

“I think it’s something that just stayed with me; the month of September being that anniversary that always is just, I don’t know, kind of a bummer,” he said “But it’s weird. When things happen like that when you’re that young, it’s almost like life starts at year zero, or something like that.”

In the interview, Stern asked Armstrong if he ever thinks about his father when performing or hearing “Wake Me Up When September Ends.”

“I mean, yeah. I think about him every day,” Armstrong continued. “I kind of avoided writing about him for many years and then finally having a breakthrough. It felt good. It wasn’t a negative emotion so much, but just honoring him.”

As well, back in 2018, Armstrong was asked about the September memes in an interview. More specifically, he shared his thoughts on those that send him the same meme every single year.

He also said he might write a song called “Shut The Fuck Up When October Comes” in response to the flood of comments he receives on Oct. 1.

Given the personal and emotional nature of the song, Green Day fans aren’t too happy that the September memes still continue to come back each year. Now, they are reminding the internet that the song isn’t really something to joke about.

every september I wake up to green day trending so pic.twitter.com/x4nwgJUjQz

since its September now, heres ur reminder to please not joke about the green day song “wake me up when september ends” the song is about the singers father who died of cancer when he was a kid. its just not funny. #Follow pic.twitter.com/7Ob2jd3ulS

“wake me up when september ends” is a song billie joe armstrong wrote about his dad dying of cancer, and every september without fail a ton of people spam him with memes about it, which really fuckin sucks!!! don’t do that!!!

I will block every person making a green day ‘wake me up when september ends’ joke no exceptions it’s not funny and it’s disrespectful. pic.twitter.com/EUGL8b9BEU

since its September now, heres ur reminder to please not joke about the green day song “wake me up when september ends” the song is about the singers father who died of cancer when he was a kid. its just not funny.

Every year, Green Day becomes the focus of a meme as September rolls around. Shared heavily on the first day of the month, social media leans in on using the American Idiot lyrics as a joke.

Like clockwork, as the month comes to a close, the meme resurfaces on the first day of October to ask if anyone woke the band up. This year, the band’s name started trending on Twitter as a result.

We can FINALLY wake up Green Day after the longest September on record. pic.twitter.com/GsMFf3e5PH

It's that time of year again. Someone go and wake up that guy from Green Day…😀 pic.twitter.com/je179N890e

pov when you wake up green day a day early pic.twitter.com/IogWvpaKLP

Billie Joe Armstrong even jumped in on it this year, sharing a Family Guy-inspired meme on Instagram. 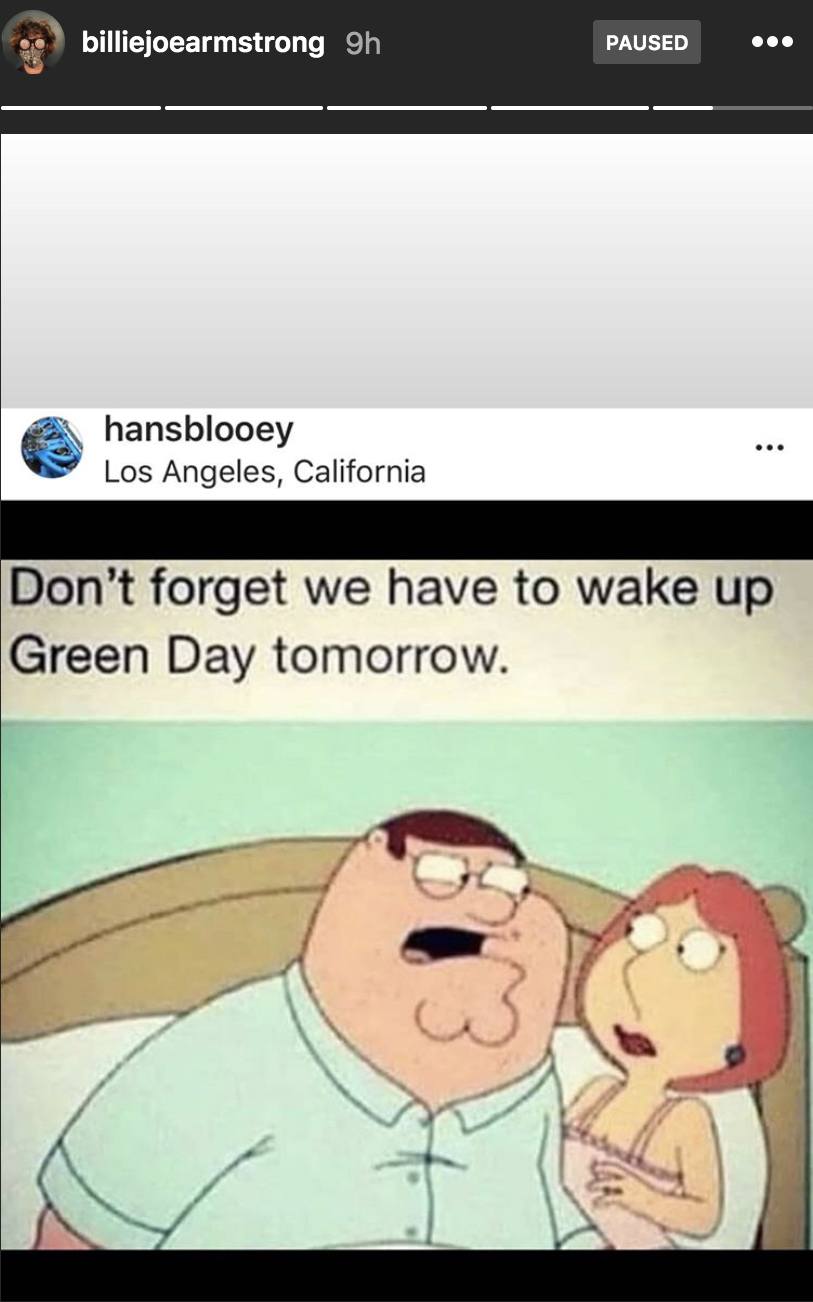 However, just like Sept. 1, Green Day fans are reminding the internet why the jokes aren’t funny.

reminder please don’t make jokes about wake me up when september ends or green day since september ended, the song is about billie joe armstrongs father passing and it’s not really an appropriate thing to make jokes out of

Billie has said many times how much he hates what it has become as a meme on the internet, and wishes it would stop. He has tried to make light of the pain it causes him and how uncomfortable it is, by joking that he wished he'd written "Shut the F*** Up When October Begins."

In general, the internet was pretty self-aware of the situation, even making memes about not making memes.

Me trying not to tweet about Green Day tonight pic.twitter.com/UsAQ0nfa3W

the green day people looking at their mentions rnpic.twitter.com/janIyaHcxR

green day stans: stop making wake me up when september ends jokes! its not funny!

‘1st October someone better wake up Billie Joe out of Green Day’ pic.twitter.com/RC1OiolvTL

The “Wake Me Up When September Ends” video is available to watch below.

What are your thoughts on the “Wake Me Up When September Ends” memes? Have you used them before? Let us know in the comments below.