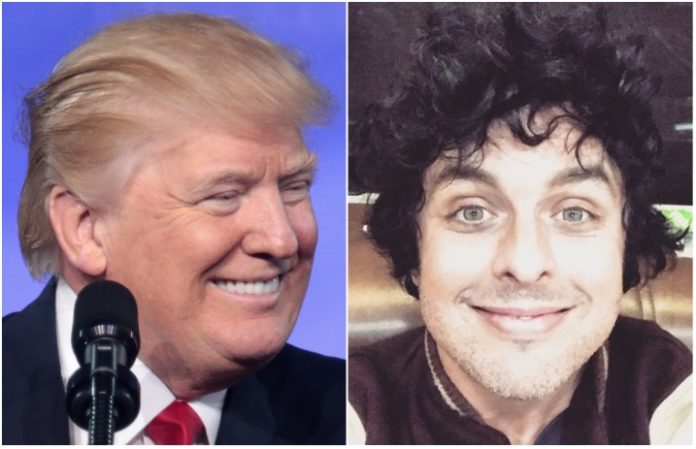 It looks like Green Day's Billie Joe Armstrong has had enough of President Trump's Twitter tirades. Although the musician isn't exactly known for his love of authoritarian figureheads, Armstrong took to Instagram last night to earnestly suggest Trump's impeachment, saying, “This has to stop.”

Unless you were hiding under a rock throughout 2017 (and we wouldn't necessarily blame you), you're probably familiar with Donald Trump's seemingly frenzied use of Twitter as his personal and political bullhorn. Over the last year, by way of the social networking service, he announced his intention to ban transgender individuals from the military (as reported by Time) and seemingly admitted to obstruction of justice in an FBI investigation (per Mashable)—to highlight but two of his unfiltered Twitter edicts. In what is surely an alarming start to 2018, our commander in chief got in a nuclear-warhead-measuring contest with North Korean dictator Kim Jong Un on Tuesday (via CNN).

Yep, that's our president, making phallic war threats to the shadowy “supreme ruler” of a tyrannical dictatorship on social media. And it seems that this “Nuclear Button” tweet in particular is what got Armstrong all riled up, as the Green Day frontman posted a screenshot of Trump's latest rant, along with his plea for the president's impeachment, to Instagram. “This isn’t funny,” Armstrong writes in the photo caption. “This is our president acting like a madman drunk on power, threatening to kill innocent, starving people by way of nuclear war. The twenty-fifth amendment needs to be enforced.”

The amendment to which Armstrong refers, of course, pertains to the succession to the presidency in the case of a vacancy, and it also addresses government response to presidential disabilities. As pointed out by Loudwire, Section 4 of the amendment details the process of removing a sitting president from office if a group of certain government officials decides he is “unable to discharge the powers and duties of his office.” The Green Day singer and guitarist appeals to this notion specifically, writing, “This man is sick and unfit for office. I don't care if you're liberal or conservative… this has to stop,” appending to his post the hashtag, #ImpeachTrump.

Armstrong's been a vocal critic of the president since he took office. In January, he called Trump's first week “an all out assault on our civil liberties,” saying the president's electoral college victory proved that “social progress got punched in the face… It's hard to tell if we made any progress at all.”

Welcome to a new kind of tension, folks. Armstrong doesn't wanna be an American idiot, living in a land where everything isn't meant to be okay. Read Trump's tweet, followed by Armstrong's Instagram post, below.

North Korean Leader Kim Jong Un just stated that the “Nuclear Button is on his desk at all times.” Will someone from his depleted and food starved regime please inform him that I too have a Nuclear Button, but it is a much bigger & more powerful one than his, and my Button works!

This isn’t funny. This is our president acting like a madman drunk on power THREATENING to kill innocent starving people by way of nuclear war. The 25th amendment needs to be enforced. This man is sick and unfit for office. I don’t care if your liberal or conservative.. this has to stop . Please share #impeachtrump