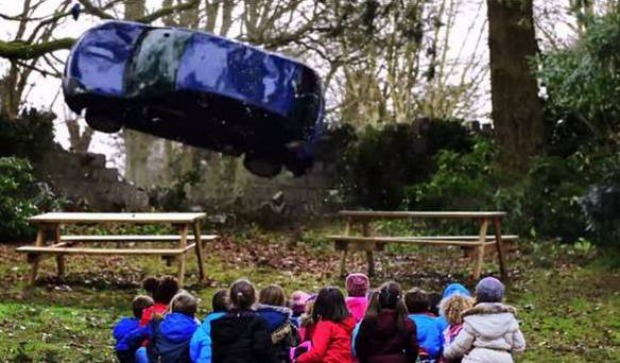 A creepy, acoustic cover of Guns N’ Roses classic “Sweet Child O’ Mine” has been used in one of the most disturbing anti-speeding ads ever made. To discourage people from speeding, North Ireland’s DOE Road Safety created the commercial, where a class of kids are killed by a speeding car with a driver who has lost control.

“Since 2000, speeding has killed a classroom of our children,” the ad narrator says. “Shame on you. You can never control the consequences if you speed.” The commercial is designed to demonstrate how 28 children have died in accidents caused by speeding cars since 2000.

According to the Independent, the ad has been banned from TV before 9 p.m. Assistant Chief Constable Stephen Martin, of the Police Service of Northern Ireland, said, “This advertisement depicts very clearly and very starkly the risks involved when speed is a factor.” Check out the bizarre clip below, and let us know your thoughts. Is this sort of thing too far? Is it an appropriate use of the song?