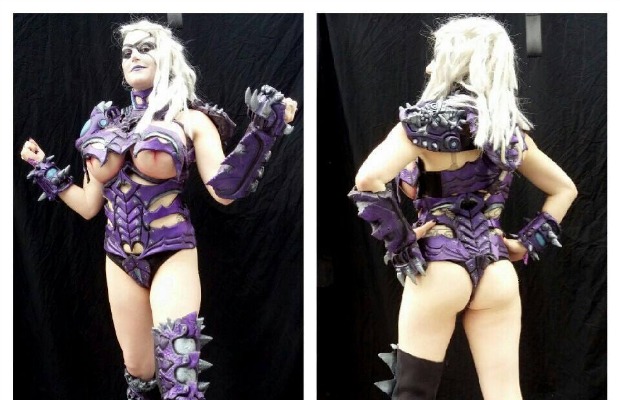 Farewell, Vulvatron. According to Lambgoat, GWAR have announced the departure of Kim Dylla, who only recently joined the and as Vulvatron. The band has issued a full statement, which you can read below:

“GWAR, the world's premier shock rock band, today announced that Kim Dylla was released from the band directly following the fall 2014 GWAR Eternal Tour, and will no longer perform with the group. Dylla played the character of Vulvatron, a buxom Scumdog from the distant future, on the band's last national tour. The group garnered quite a bit of press when it was erroneously reported that Dylla, in the role of Vulvatron was the new lead singer for the band.

Brent Purgason, slave of the recently defrosted intergalactic barbarian, Pustulus Maximus, had this to say; “Kim did a great job, but we wanted to go a different direction with the Vulvatron character. You will absolutely see more of Vulvatron in the future, just not portrayed by Kim. There is no ill will, no acrimony, and no drama. We respect Kim's talent without question, it just isn't what we needed in the character.”

In the GWAR lore, Vulvatron is described as “genetically engineered to the optimum proportions for a female of her species. Vulvatron has returned from the year 69,000, where she was a high-ranking Scumdog assassin in the battle against futuro-fascist forces. Her primary functions include mastery of the arts of war, quantum mechanics, and intergalactic musicology.”

Dylla released a statement of her own:

“It's really nice when you find out important things from people you consider to be your friends from posts on the internet and messages from strangers. There is something called basic respect not existing in that modus of communication. That being said, I'm currently looking for a new vocal gig with a serious metal band that likes to tour their asses off. Doesn't matter what style but no core b.s., no symphonic metal. Must be chill dudes and down with beer drinking hellraisers. Must not be threatened by strong women, no deep-seated drama. Location unimportant.”