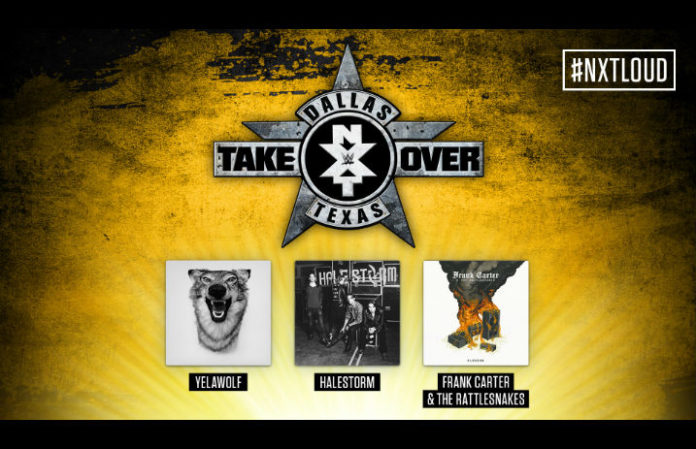 Three bands have been announced as NXT: Loud artists for WWE’s upcoming NXT TakeOver: Dallas event, and the song themes the NXT Superstars have picked are pretty awesome! Triple H tweeted about the announcement earlier today:

“It’s undeniable that NXT has evolved into the hottest brand in sports entertainment at the moment. Our Superstars and Women’s Division from around the globe continue to raise the bar,” says Corey Graves, WWE commentator and AP contributor. “It’s only appropriate to have a soundtrack of artists that are defying genres and bringing the attitude and energy that defines NXT as we head into Takeover: Dallas.”

Finn Bálor: “Devil Inside Me” by Frank Carter And The Rattlesnakes

Bálor’s song is a pretty appropriate choice, not only because of his evil-looking red makeup choices; Bálor is to be feared after winning the WWE NXT’s Male Competitor of the Year award in 2015, and he’s the current NXT Champion.

Bayley is the women’s champion. And with Halestorm’s intense song pumping her up for a match, her chances of holding onto that only get better.

Enzo: “Fiddle Me This” by Yelawolf

Enzo is known for his trash-talking, which makes this song by Yelawolf a good choice for his fighting style. He’s not the biggest fighter on the floor, but he’s a tough fighter with plenty to say.