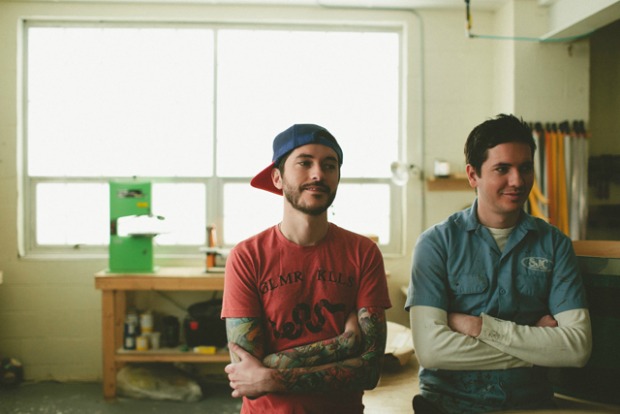 Drum Heads, the Halogen original series, gives music fans a behind-the-scenes look into the world of SJC Custom Drums and the two brothers who run the company, Scott and Mike Ciprari. The two turned their hobby and passion for music into one of the most successful and highly sought after drum making businesses in the country, SJC Custom Drums. Twelve years ago, these twenty-something visionaries founded the business out of their grandmother’s basement in Dudley, Massachusetts. Today, SJC has created more than 1,700 one-of-a-kind customized drum kits (that you won’t see anywhere else) for some of the most recognizable names in music, including Panic at the Disco, Gym Class Heroes, All Time Low, A Day To Remember and the Used.

While Scott and Mike may have hit the right notes in building a profitable business, Drum Heads showcases their struggle to build a personal relationship with one another. The brothers are constantly at odds and the tension between them is palpable, often causing their father to serve as the sole voice of reason.  Mike, who himself has a band, is outspoken and dogged in his quest to design the craziest kits and close as many deals for SJC as he possibly can. Scott, the more reserved and introverted of the two, spends most of his time in the paint shop, creating spectacular finishes. He likes to work alone, but is uncompromising when it comes to how things are run around the shop. Problems arise when Mike makes unrealistic promises to clients, leaving Scott and the rest of the eclectic staff to meet stressful deadlines.

Episodes follow SJC as they work to complete specialized drum kits for bands Eric Church, Hanson, Every Time I Die, Four Year Strong and Dropkick Murphys. Known for their innovative designs and expert craftsmanship, the SJC team pulls out all of the stops to craft a kit that is specifically tailored to each artist. In their quest to create the perfect match between personality and need, the team travels off the beaten path to eccentric locations, including an alligator farm and an Irish dance company, to find inspiration.