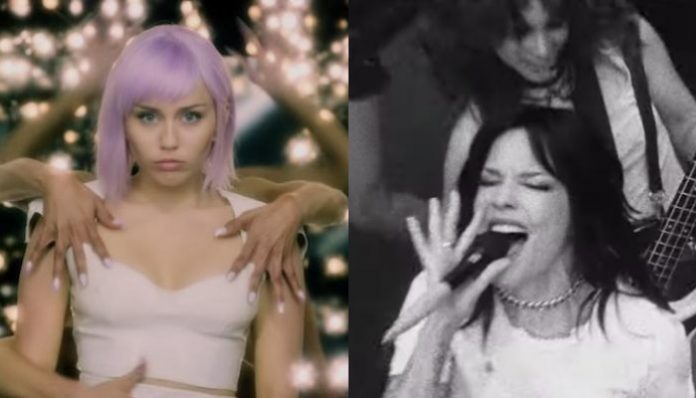 Halsey has taken notice to the strange similarities between herself at Miley Cyrus’s Black Mirror character named Ashley O.

To take it back, Cyrus appeared in the latest season of the Netflix show, where she gave the Nine Inch Nails track “Head Like A Hole” a pop twist.

The third Black Mirror episode, “Rachel, Jack and Ashley Too,” has the singer/actress in the role of a pop star. Instead of focusing on Cyrus’ own music though, they opted to recreate classic Nine Inch Nails tracks.

Black Mirror creator Charlie Brooker says even Trent Reznor  has given his blessing to recreate his band’s songs for the series.

Now, pop singer and former scene kid Halsey noticed the weird similarities between herself and the character.

ASHLEY O AND U SHOULD FUCKING COLLAB

…but are you stoked on ambition and verve?

And then one fan noted that the character went “from super pop to alt rock/punk” to which Halsey had a very serious response.

If I die they killed me. https://t.co/KuEyvYzPoP

Then someone responded with a photo of the singer looking exactly like the Black Mirror character.

And the replies just made things even weirder.

bruh should we be worried your managers are tryna take you out???

The entire thing is super freaky, but we definitely wouldn’t hate a collab between Halsey and Ashley O.

Halsey shared a hilarious throwback that not only shows her love for the scene but reminds her fans where everything got started.

Halsey took to Twitter to share a photo of her as a child, sporting an Evanescence shirt and playing the violin.

“so much to unpack here. the evanescence shirt. the hot topic pants. the look of determination. the Costco glasses. the secondhand violin that got me into music. this post is a whirlwind,” she wrote.

so much to unpack here. the evanescence shirt. the hot topic pants. the look of determination. the Costco glasses. the secondhand violin that got me into music. this post is a whirlwind. pic.twitter.com/BFESTnO0k3

Honestly, we can relate to this. Also, we love seeing the throwbacks of the artist before she was a huge international star.

She’s previously defended her emo upringing with her love of My Chemical Romance and talked about her love of bands like blink-182, Taking Back Sunday and Fall Out Boy. She even cites those groups as influences behind her song “11 Minutes” with YUNGBLUD and Travis Barker. She’s also bragged about getting to see Bring Me The Horizon when she was just 14 years old.

Also, Halsey recently performed in Camden and gave an empowering speech about LGBTQ Pride and bigotry.

For background, recently, two women were beaten in a homophobic attack on a London bus that garnered a lot of attention online.

Also, it’s Pride month, and some people in Boston are pushing for a “straight pride” parade, causing major outcry.

At the show in the city, Halsey wore a shirt with their faces on it. It also read “Fuck your straight pride” on the back.

tonight in camden @halsey wore a shirt with that picture of melania and chris after their assault and a message that said “fuck your straight pride”. it made me fucking cry and i’m very thankful for her. pic.twitter.com/sbZTR1gKgd

She then gave a passionate speech, slamming straight pride and homophobia.

“After the Pride parades are over and after the bars close their Pride nights and the glitter is being swept out of the streets, a lot of people get on those trains and they get on those buses and try to wash the rainbows off their bodies and they’re peeling the stickers off their close because when Pride is over, it’s not safe to be gay anymore because they’re worried that someone is going to viciously assault them or viciously attack them. So when the people around the world ask the question, “Why isn’t there a straight pride parade? The answer because if there was one, you wouldn’t have to get on the bus and be terrified of being fucking beaten or killed afterwards. That’s why there’s not a straight pride parade because every fucking day on public transport is a straight pride parade.”

She then led the room in a powerful chant of “I will not be afraid.”

The entire moment is extremely moving, and was caught by fans at the show. You can her full speech below.

Halsey getting a room full of queer kids to scream “I WILL NOT BE AFRAID” after two women were beaten for being gay in the exact same town she’s performing in. She’s wearing a shirt with their faces on the front, and “FUCK YOUR STRAIGHT PRIDE” on the back. pic.twitter.com/VssWprS3gX

What do you think of the weird similarities between Ashley O. and Halsey? Sound off in the comments below!