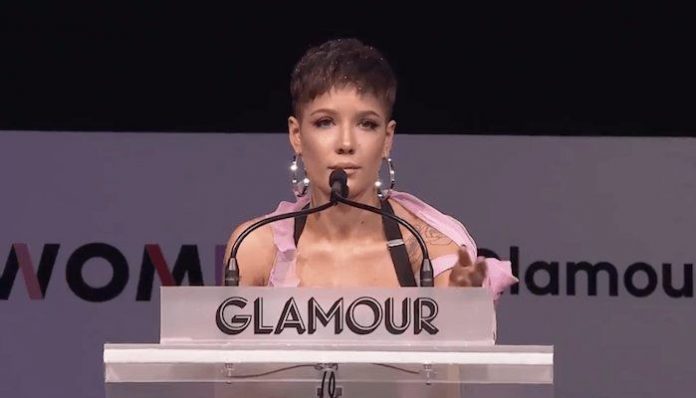 Halsey is always one to speak her mind, and in turn makes us love her even more for it. The alt-pop singer made no exception when preparing a poem for Glamour‘s 2018 Women Of The Year Summit Sunday.

She broke down the double standards facing women while also sharing a first-person experience she had with Glamour when preparing the poem in question.

Halsey spoke at the second annual Women’s March in New York City January of this year. There, she explained “I don’t really know how to do a speech unless it rhymes, so I’m going to do a little poem for you guys.”

In the Glamour speech, she explains she’s continuously asked to deliver poems since that event. This one, however, is the first time she’s agreed.

Check out the full poem “An Inconvenient Woman” and transcript courtesy of Glamour below.

Today I performed my first poem since the March, at the @glamourmag women of the year summit. Making yourself smaller is not the way to create space. This is titled. “An Inconvenient Woman.” Thank you. pic.twitter.com/6YzKZvr9Qb

Brutally honest, outspoken and fearless
Goes with their gut, never favors appearance
‘Cause who has time for vanity with opponents to extinguish?
And don’t you think that hint of silver hairline is…distinguished?
In men? All these qualities, they make you a genius.
But if you’re a woman, you’re an inconvenience.

So he storms through the halls and he tracks down his boss
Two years in this office he’s battled across
A media major, he’s craving the glory
Bursts into a meeting, demands better stories
The newsroom head is delighted, you must know
“Now that’s how you do it! Just show me some gusto!”
And four feet away, in department store heels
Is his colleague, Sarah. She fights back her tears.
Cause she chased him down every Friday in winter
Three years in this office (plus two as an intern)
And when she requested some tasks with more substance,
He glanced at his phone and responded, disgusted,
“Please lower your voice, and how dare you approach me.
Really, your tact could afford you some coaching,
You’re acting so crazy!” His tone was defeating.
“And have some respect, I’ll be late for my meeting—
You’re being…inconvenient.”

It’s 7pm and her husband’s arriving
She fires the stove and just stares, though she’s trying.
It’s been a few days and she slept on the couch,
Depression has stolen the smile from her mouth.
He walks in, he’s angry, he asks about dinner.
“But couldn’t we just order in,” she considers.
He stares with a vacant and displeased expression,
“So why do we pay for these therapy sessions?
If you can’t be decent and take a damn shower.
You won’t ever fuck me, you’re crying for hours.
When I first ever met you, I LOVED all your crazy.
You stayed up all night and you dressed like a lady.
You fucked like a rabbit, you loved it back then,
But now you’re this lump of a mess in my den.”
He stormed out the room and she folded his tie.
She first bought it for him when his father had died.
He slept in for days and he missed weeks of work,
So she took up some supplement shifts as a nurse.
She never complained, though, she made it a promise.
But she liked her manic self, too, to be honest.
She wished that her crazy was sexy and fun, too.
But depression snuck up and she started to undo.
Why can’t she just man up and act like a wife?
She vowed to a man that she’d serve him for life.
She really doesn’t mean to be so inconvenient…

Read more: Halsey reacting to “I Write Sins Not Tragedies” is all of us

So let’s cut to a woman who’s lived out a miracle.
Made it through life being less than agreeable.
She’s running for office but battles a bias
So to fix it, she’s hired the best team of stylists.
They try her in pantsuits and skirts tailored perfect
She stares at the mirror and bleeds through its surface.
“But why do I need to look pretty to be seen?
I’m far better qualified and he’s just plain mean.
While he’s loud and he’s touting a hot wife to gloat,
So you know that’ll earn him the working-class vote.”
“They think that you’re old and the polls all reveal
That they really won’t like you with no sex appeal.
It’s not really fair, but it’s just how things are done.”
So she pinches her wrinkling skin in her thumb
And thinks, “Isn’t this just inconvenient?”

Read more: Halsey drops emotional vertical video for “Without Me” on Spotify

A couple meanders through Sunday brunch tables
They pick up some coffee and inspect the bagels.
Somebody approaches an after-church service.
Immediately our young wife becomes nervous.
She asks if they’re planning on having a child
She looks at her feet and her manner grows mild
“She’s trans but that’s none of your business here, lady.”
She doesn’t want kids but the subject of babies
It makes her get anxious, she knows that she’s valid.
But her belly’s not carrying much more than a salad.
Her husband, defensive, he rubs on her arms
Politely replies, it’s just not in our cards.
The churchgoer’s rude and refers to the sermon,
“No children? Well that’s just a waste of a woman.”
She relays this story to friends over wine,
And they tell her that not wanting children is fine.
She says, “Well if you wanted, you could carry your own.”
But she doesn’t know all their stories at home.
Cause some of them spend their nights cursing their wombs
Over handfuls of pregnancies ended too soon.
But before they can say they feel inadequate, too,
A fight erupts down in the back of the room.
A black woman storms through the bar in her apron
It seems she’s in trouble for slapping a patron
He put both his hands on her backside and squeezed
He said, “White women really don’t got ‘em like these!”
Her boss is irate and he tells her she’s let go.
“Why can’t you behave, yo’, you’re acting so ghetto.”
She tried to defend herself only to find
A black woman’s anger is never in line.

Read more: Halsey took live tweeting to another level for her AMAs performance

Aren’t all these women just so inconvenient?

Ever since the march I’ve been asked to write poems
But irony proves to be just ever-growin’
I’m asked to address how to be “inconvenient”
But before I can speak, first they want me to screen it.
They’re scared that I’ll freak out and do something wild!
But censorship really just isn’t my style.
Some even suggested that they write the speech
But how could they say that they do what they preach?
With all due respect to these media teams,
I don’t get on a stage and not say what I mean.
So, sorry to Glamour for cursing too often
But I’ve never really been the type that would soften.
A message I’m passionate about in my bones
So, if you’re offended, and viewing at home:
I’m here to say that I’m not sorry
For being…inconvenient.
You were not put on this earth to make everybody else’s life easier.
So please, be inconvenient.