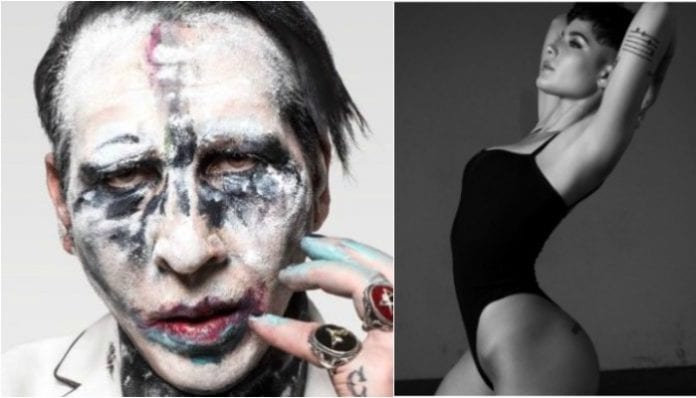 Halsey just got some fresh new ink while in Adelaide, and we’re obsessed with it. Check out the singer’s incredible new Marilyn Manson tattoo below!

Halsey has stirred up quite the frenzy over the last 24 hours. Our emo queen took to Twitter to tease a song with Yungblud that would be dropping later this evening.

Oh, did we also mention it will feature blink-182 drummer Travis Barker?

As if that wasn’t enough to throw fans into a total freak-out, both Yungblud and Halsey then took to Instagram to tease a “surprise” for Sydney fans tonight.

Adding to her list of surprises Halsey revealed the wicked new ink she received while in Adelaide.

The songstress did have to provide a little clarification for some of her Twitter fans who had not seen the photo yet.

In other Halsey-related news, she recently pulled double duty on SNL acting as both the show’s host and musical guest.

Her performances blew many fans away as she painted a giant portrait upside down while singing “Eastside”.

What stood out the most however was her supposed call-out to ex-boyfriend G-Eazy during her “Without Me” performance.

Our girl also held down multiple skits, including a Riverdale spoof where she stars as Betty Cooper.

To say Halsey is staying busy is quite the understatement.

We’re super excited to hear this brand new track with Yungblud and Travis Barker later this evening. In the meantime, we’ll be admiring her new ink and watching her “Without Me’ performance over and over.

Are you excited for a new song? What band/artist inspired tattoos do you hold near and dear? Sound off in the comments below!