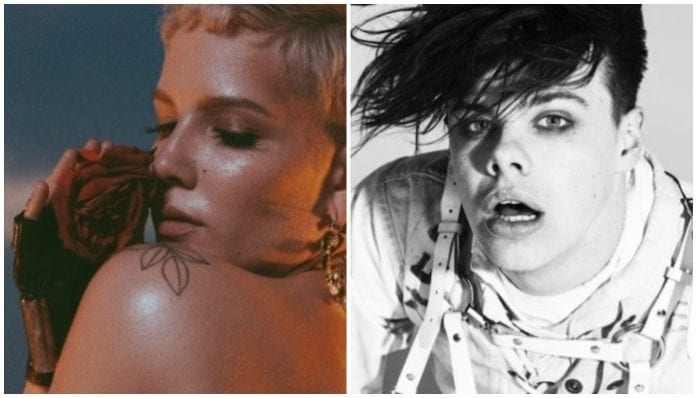 Halsey and YUNGBLUD put on a once-in-a-lifetime show for fans at the iHeartRadio Wango Tango that you just can’t miss.

The set all went down because Halsey surprised fans by bringing YUNGBLUD on stage to perform their track “11 Minutes.”

Before that, she performed “Bad At Love,” “Eastside” and “Now or Never” to the crowd before bringing out her special surprise guest.

“I brought a friend with me tonight,” she told the crowd. “How many people are here tonight with someone you love?”

You can see some clips of what their performance looked like below.

And you can check out the official “11 Minutes” video below, because why not.

Halsey’s new song “Nightmare” is undoubtedly intense. It’s an anthem that makes fans want to jump around, scream and apparently, speed on the road.

One fan shared a story about getting a speeding ticket while listening to the new song that led to Halsey reaching out herself.

“Driving home from Penn State I got pulled over/given a ticket for the first time ever and when asked why I was going 99 in a 70 I was ~dangerously~ close to admitting I was bangin out to @halsey’s new song Nightmare,” the tweet read.

Then, the singer reached out herself and offered to pay the fines.

Halsey’s right, we should drive safe. But she obviously can’t blame the fan either who just went a little too hard to her new song.

As for the story of “Nightmare,” it’s pretty intense itself.  Earlier this month, Halsey embarked on the new era by blacking out her social media after the Billboard Music Awards. Then, she posted a link in her social media bios that directed fans to a site where they could sign up for email alerts and proceed to share their worst ever nightmare.

The song serves as an empowering anthem detailing themes of bodily autonomy and independence. It also featured appearances from actress/model Cara Delevingne and rock icon Debbie Harry of Blondie, the latter of which Halsey called “a no brainer” when including her.

She’s an icon. It was a no brainer! We’ve done interviews together and she presented me my billboard women in music award a few years ago! https://t.co/Ea0W1zOlNX

Following the song’s release, Halsey also shared that her fans were her inspiration.

“imagine getting onstage every night and seeing young women sweating mascara tears, lightning in their eyes, throwing elbows and raising fists, screaming till the veins in their necks raise under warm skin, and not being inspired by it. this song is about you, for you.”

imagine getting onstage every night and seeing young women sweating mascara tears, lightning in their eyes, throwing elbows and raising fists, screaming till the veins in their necks raise under warm skin,

and not being inspired by it.

this song is about you, for you.
🖤

You can watch the official music video for “Nightmare” below.

Halsey recently released a “Nightmare”-inspired shirt where 100% of the proceeds go to The Yellowhammer Fund for abortion accessibility. More information is available here.

Halsey has a handful of dates in the U.S. and U.K. this summer with a full list here.

What do you think of the surprise Halsey and YUNGBLUD performance? Sound off in the comments below~