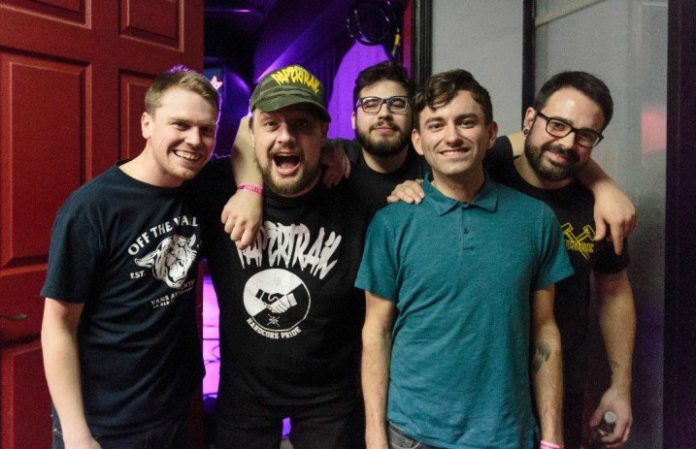 Pop punk outfit Handguns are calling a truce and getting the original lineup back together to release new material. The members from the 2010 lineup are now current members: vocalist Taylor Eby, bassist Nate Bobb, drummer Marco Florey and guitarist Thomas McGrath. No one is more excited than founding member and newly reinstated guitarist Jake Langley, who we spoke to about what went down to get the band back together.

“The band Transit thinking they can time travel is basically what prompted the whole thing,” says Langley, laughing. Handguns were offered to play the Boston indie-rock band’s last tour, but only with the lineup and records that Langley had been apart of. “My response was, ‘Not unless you have a flux capacitor, because I’m not in the band anymore.’”

After mentioning the offer to Eby as a joke, the idea of getting the band’s original members back together began to take hold. Handguns played what they thought was going to be a one-off show with Langley during Four Year Strong’s Rise or Die Trying tour in April.

After the show and an unfortunate tweet made by a current band member, it was decided that Handgun’s old lineup would try again. “If it’s not you guys, it’s no one,” Langley remembers Eby saying. “We all looked at each other like it wasn’t even a question. It was, like, ‘Yeah. Let’s do it.’”

The newly reformed line-up already has seven songs written and plans on getting into the studio very soon to record their forthcoming, yet untitled, new album. “I believe we’re going to record with Nik Bruzzese (Man Overboard) and Ace Enders (the Early November) in New Jersey at The Lumberyard,” details Langley.

The record will be all about handling friendships and the journey Handguns has gone through with their line-up changes. “It’s basically about living on top of your friends and having to balance that with emotional sanity, because sometimes you just want to knock your friend out. You love them to death, but you just want to punch them right in their face.”

Handguns will be releasing their new record on Langley’s label Pass Along Knowledge Yourself. “We want to be a DIY band. Our label is the only label of its kind,” he explains. “We call it Anarchist Collective. We don’t want to own the right to sell art that we didn’t make… [Our friends] put their own release out. We just aid in putting it out.”

The band also plans to play three or four shows before entering the studio to raise the rest of the money for recording. Two dates are still to be confirmed, but one definite is in Erie, PA on Jan. 27.

As far as Langley is concerned, he just wants to let Handguns fans know that they’re more than valued. “We appreciate anyone who still gives a damn… I know when it comes to band drama, people just don’t want to hear it. They just want their bands to get along and stay the same people and stay the same thing, forever… I just want to say thank you to everyone who still gives a shit.”