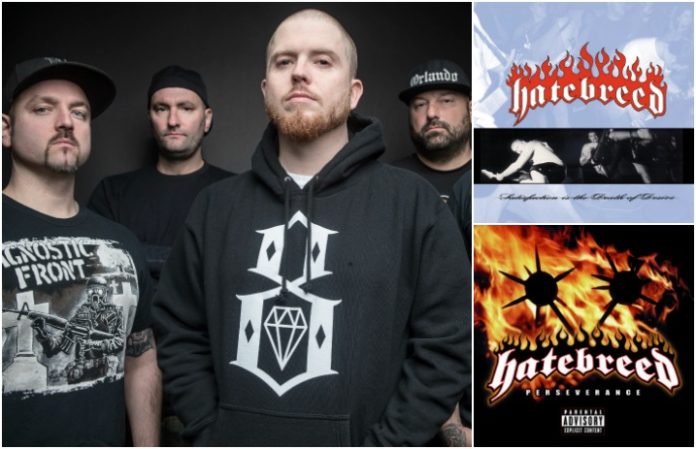 Metalcore pioneers Hatebreed are hitting the road this fall in celebration of their first two albums, 1997's Satisfaction Is The Death Of Desire and 2002's Perseverance! See the complete list of cities and dates below.

The 20 Years Of Desire & 15 Years Of Perseverance Tour kicks off on Thursday, Oct. 26, in Houston, and wraps up on Saturday, Dec. 9, with a show at the Starland Ballroom in Sayreville, New Jersey. Following the U.S. run of anniversary dates, the band will embark on the Persistence Tour 2018 in Europe this January. Tickets for the gigs go on sale this Friday, Aug. 25.

Satisfaction Is The Death Of Desire stands as a seminal album in the metalcore milieu, the debut LP often being hailed a “hardcore classic.” Perserverance, Hatebreed's first record to be released by a major label, boosted their ascent by introducing the band's blistering sound to a wider audience.

“Sometimes it's good to look back just to see how far you've come,” says Hatebreed frontman Jamey Jasta. “There's about four to five songs off of Satisfaction Is The Death Of Desire and about six or seven off of Perseverance that we rarely play, so we've hit the rehearsal room and dusted off a killer batch of songs and deep cuts that we'll blast your eardrums with this fall.”

Support bands for the upcoming fall tour will reportedly be announced next month. The Desire and Perseverance anniversary shows will see the group “playing a majority of songs from both albums, along with other fan favorites from across the entire Hatebreed catalogue,” per a press release.

Adds Jasta, “Come celebrate not one but two anniversaries with us!”