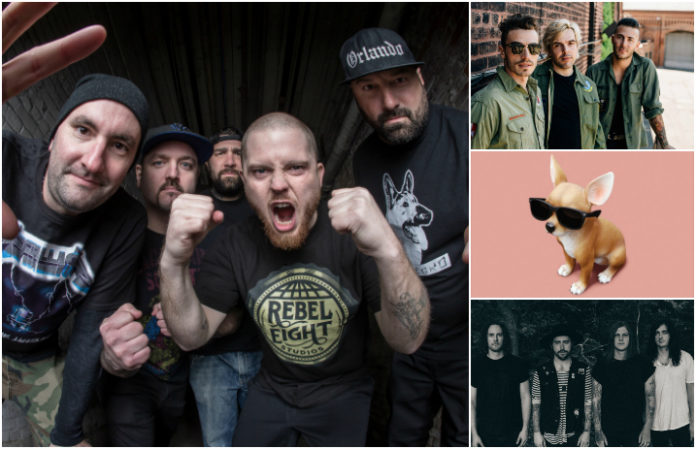 Hatebreed drop a new video for “Seven Enemies,” New Politics share their clip for “One Of Us,” and Lo Tom unveil the second single release from their upcoming album. Check out the news you might have missed today below.

Read more: Echosmith share acoustic cover of Paramore’s “Hard Times” and other news you might have missed today

Check out Hatebreed's kickin' new video for their tune “Seven Enemies”—the track taken from the group's 2016 album, The Concrete Confessional. Catch the band out on tour now: They're playing the rest of the summer on the 2017 Warped Tour. (Get the full list of Warped Tour cities and dates here.)

New Politics strap in for the “One Of Us” vid. “The past few years the three of us were on this insane ride,” the band explain of the clip. “Th[is] song is a reminder that even through the changes, or whatever else you're going through, you shouldn't take all the amazing experiences … for granted.”

Read more: New Politics release a bold, anthemic new single, “One Of Us”

Lo Tom take a ride on their “Covered Wagon”

To Speak Of Wolves get haunted on new cut

To Speak Of Wolves exclusively premiere their new song “Haunt Me” over at Revolver. It's off the band's first album in five years, Dead In The Shadow, which hits on July 21 via Solid State Records. TSOW are on the Hot Like Sauce Tour this summer with fellow rockers He Is Legend, Islander and Bad Seed Rising.

Read more: To Speak Of Wolves return with first song in four years—listen

Hey Violet put their hoods up

Hey Violet have revealed the official lyric video for their extremely catchy jam, “Hoodie,” taken from the band's new album From The Outside. Check out Hey Violet's exclusive cover story in the February issue 344 of AP—available here.

[Photo credit: Jessica Flynn]
Modern Baseball's Jack Ewald dropped another new solo jam over at Spin. It's called “Building The Ark” and the tune is taken from the musician's upcoming Motorcycle.jpg EP, to be released under the moniker Slaughter Beach, Dog.

[Photo credit: Peter Beste]
Goatwhore are streaming their new single online now. It's called “Mankind Will Have No Mercy” and you can listen to it here. The band's new full-length Vengeful Ascension is due out on June 23 from Metal Blade Records.

Body Count continue their trend of NSFW music videos with a gory new clip for “Here I Go Again.” The track is culled from Ice-T's heavy metal group's latest full-length album, Bloodlust, which was released earlier this year.

The Hotelier hit the road

The Hotelier have announced a fall tour with Oso Oso and Alex Napping. See the list of cities and dates below. (via BrooklynVegan)

Riot Fest 2017 has announced its single-day lineups! Get your ticketing info here. Also announced for Saturday: DANZIG!!! (via Loudwire)

Read more: From Taking Bark Sunday to Pawbreaker, here’s who the dogs of Riot Fest are excited to see

You ever tried Evergreen Terrace on wax?

Evergreen Terrace's 2007 release, Wolfbiker, is getting its first-ever vinyl release. Get on the 10th anniversary pre-order right here. (via Theprp.com)