Ohio-based haunted house The Haunted Hoochie came under fire over the weekend after announcing a “Swastika Saturday” event.

Who doesn’t love a good scare? The Halloween season offers up many opportunities for people to get scared beyond belief, but sometimes it can venture into going way too far—just ask the Haunted Hoochie.

The Haunted Hoochie in Pataskala, Ohio (just outside of Columbus) came under fire this weekend after announcing a “Swastika Saturday” event.

Their official website states “Warning: May not be suitable for immature audiences or for mature audience. The haunted house contains graphic and violent horror. These images may be offensive and disturbing to some, so don’t try this at home.” However, they took it even further this weekend.

The page posted an unrelated image announcing Saturday was their last night of operation for the 2018 season. Within the comments, the page posted that it was also a Swastika-themed night.

“[Get] in free with a Haunted Hoochie or Dead Acres logo tattoo for swastika Saturday including all kindsa freaky fun including Only Flesh live on stage. Hell yeah.” 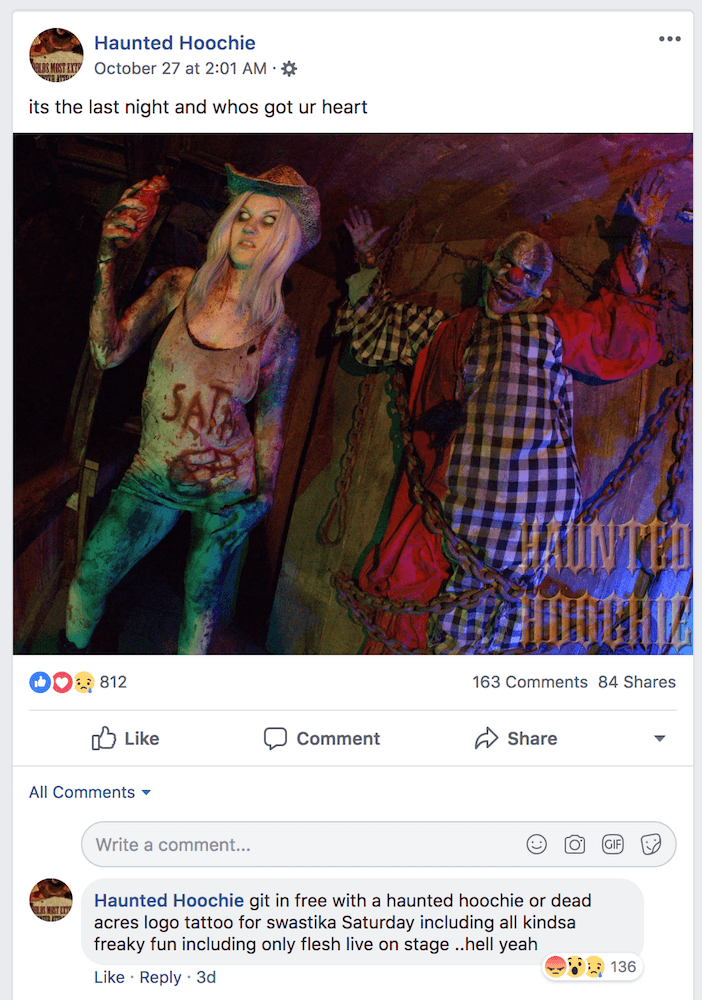 A graphic photo of haunted house employees was also posted in a private group to announce the event. 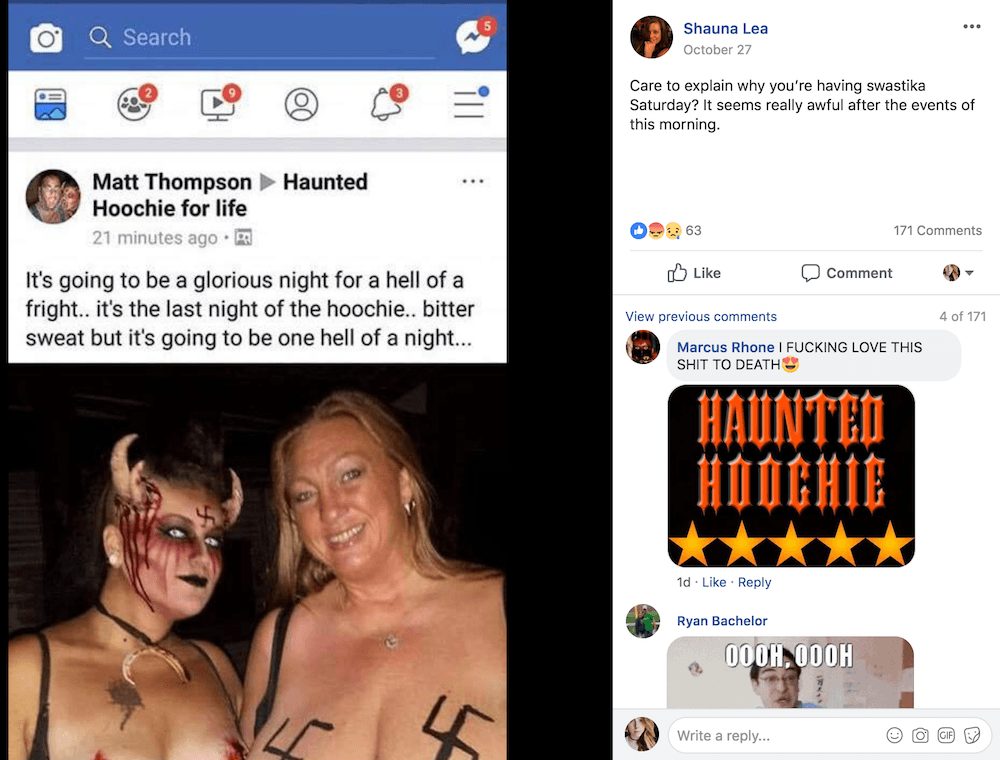 People immediately responded with disgust. Earlier Saturday, a man opened fire in the Tree of Life Congregation Synagogue in Pittsburgh, killing 11 and injuring six. This coupled with the blatant disregard rightfully upset many. 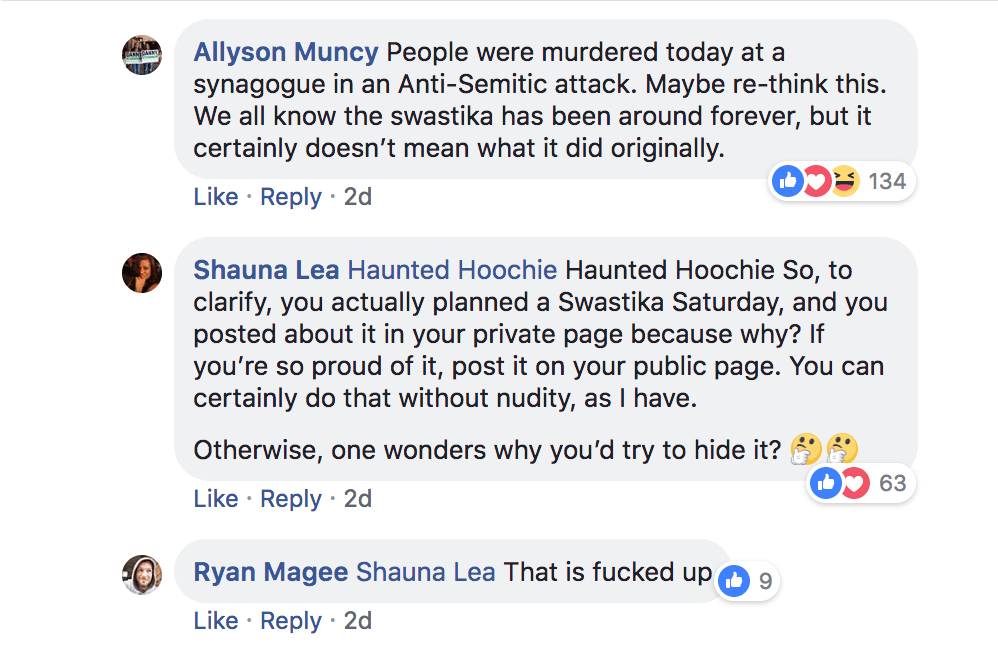 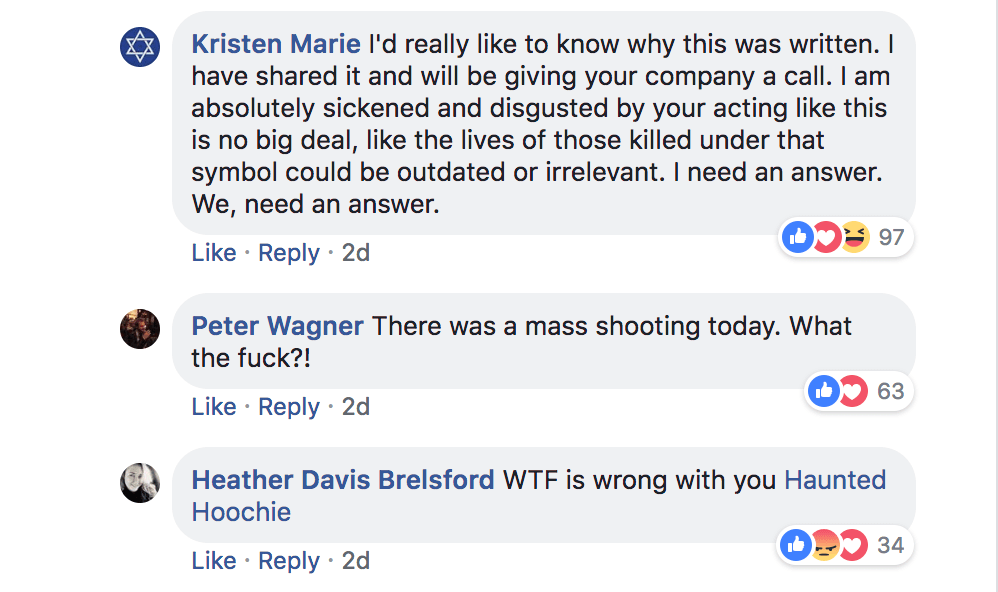 They also claimed the event has happened every year in their 20-year existence. However, some stated that was not true while others backed the house. 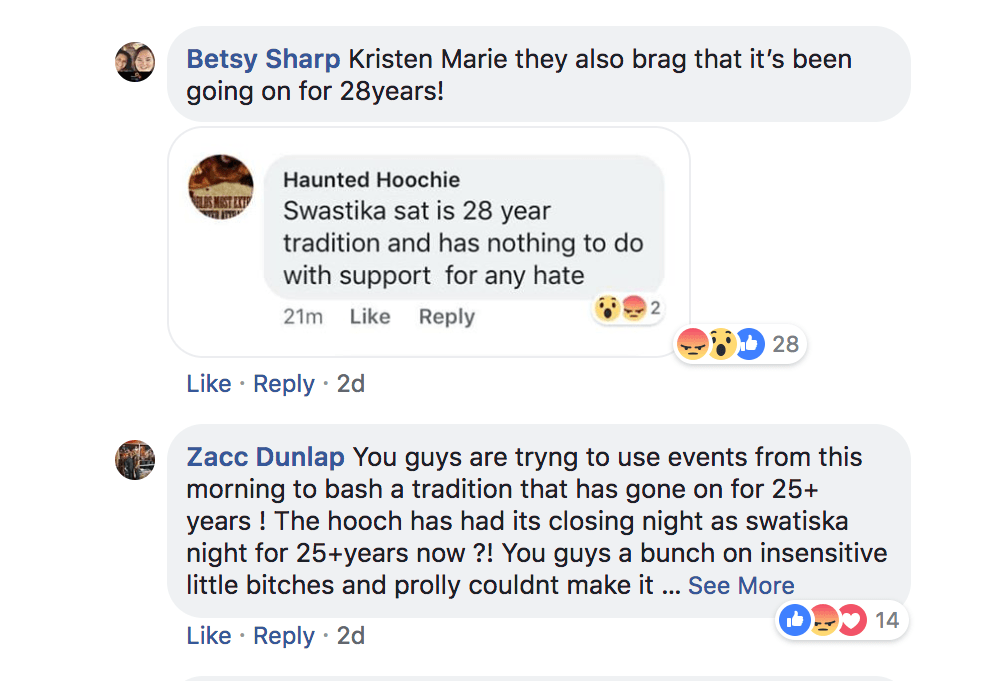 Only Flesh, the band scheduled to perform, soon announced they would no longer be doing so.


“WE HAVE CANCELLED OUR PERFORMANCE AT THE HAUNTED HOOCHIE TONIGHT. We do not condone or promote hate speech or racism in any way and cannot be associated with a place that promotes a “swastica saturday”. Sorry for anybody hoping to see us perform tonight but we must take a stand.”

The following day, the Haunted Hoochie admitted their mistake.

“Please let us make one thing clear and apologize right now for any insensitivity on our part. We show you the darkest, sickest, depraved parts of the world we all live in. We definitely aren’t nazi’s. Its a haunted house, its all about the horrors we face here on earth. We also don’t condone murder, torture, suicide by shotgun, or birth by sledge hammer. We are here to shock and awe and terrify. It does make us sad that this country is being divided against and killing each other. Don’t fall for the illusion that one race/ religion is better than another. Peace, love, and light.” 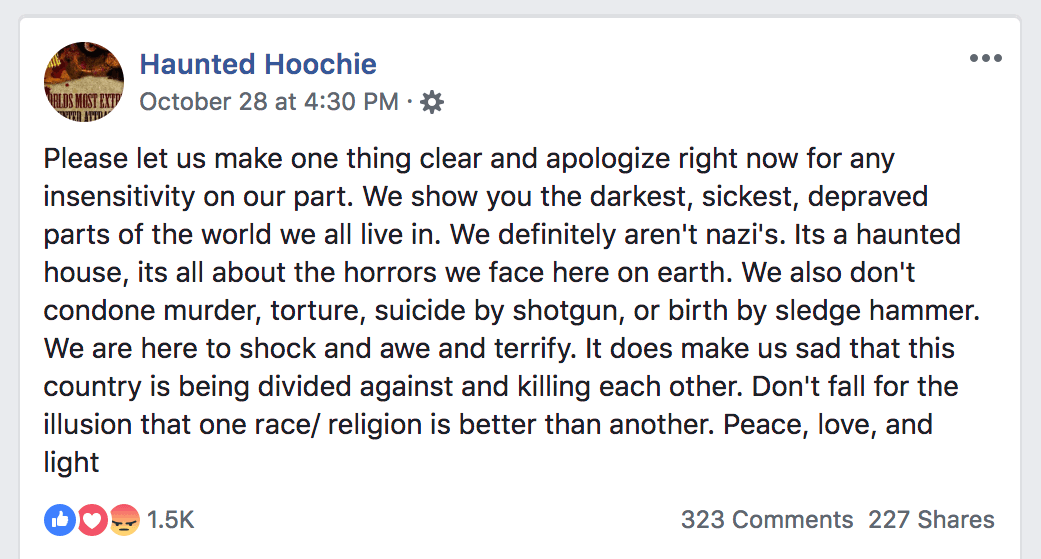 A few hours later, they continued their apology.

“We screwed up big time. On behalf of the entire Haunted Hoochie staff, we first and foremost extend our sincerest condolences to the families affected by the tragedy in Pittsburgh, and the Jewish communities of the area.

“Second, we will in no way tolerate any form of hatred on our grounds, from our staff, or from our guests. This means that certain costumes or themes may be deemed inappropriate and you will be denied admission or asked to leave the grounds.

“We will not host any musical acts which perpetuate any kind of bigotry, intolerance, hate speech, anti-Semitism, or the like, now, or ever again. The Haunted Hoochie is a place to escape the true evil in the world through the magic of Halloween theater- NOT perpetuate real evil.

“We welcome anyone to our show with open arms- provided you do not bring evil or hatred. We are working with community leaders to mend fences, and pledge our support to the victims with a fifty thousand dollar donation to the tree of life synagogue” 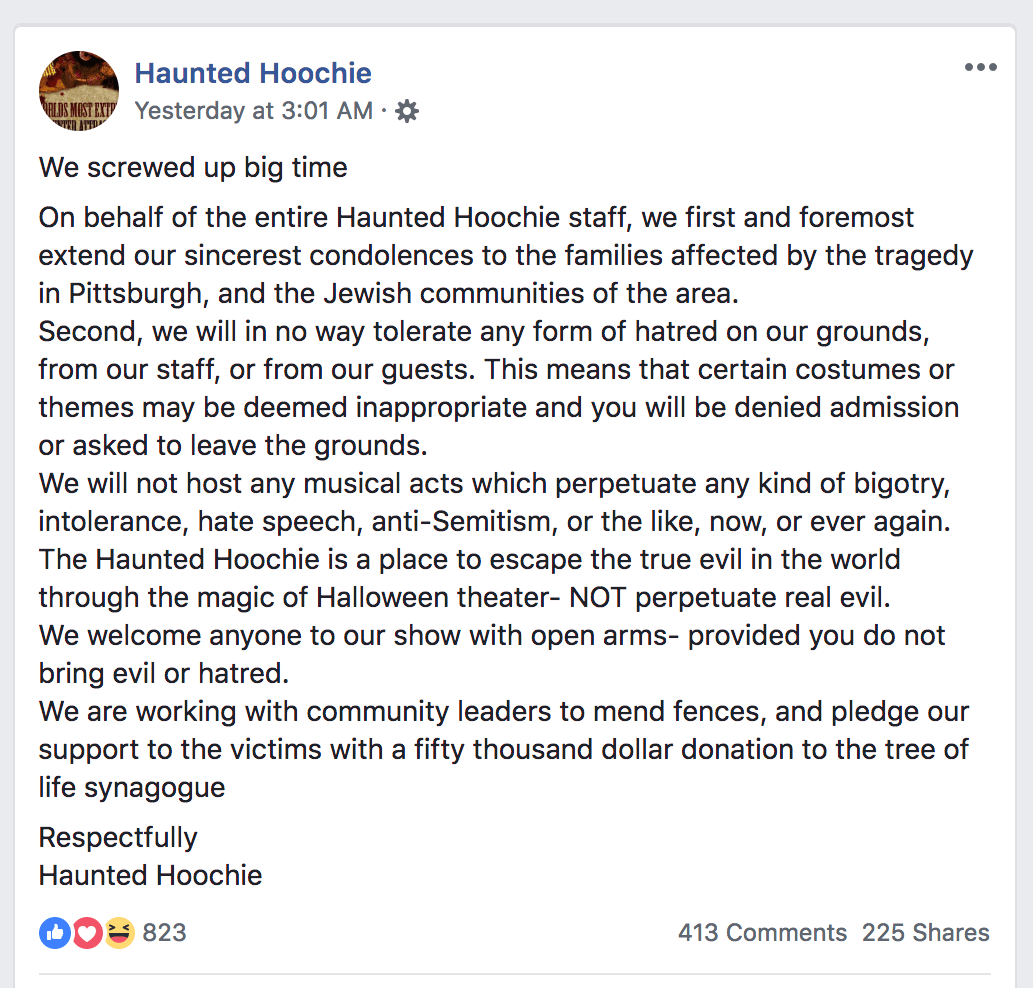 What do you think of the events surrounding Haunted Hoochie this weekend?