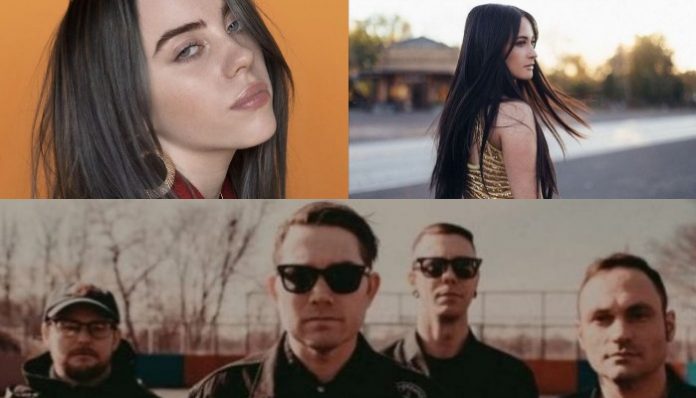 Hawthorne Heights have just released a two-song album that contains covers of songs by Billie Eilish and Kacey Musgraves.

The project is called Dads of Sad and it takes “8” by Eilish and “Butterflies” by Musgraves and adds an emo spin to them.

“The best part of music for me is reaching beyond borders and boundaries,” Hawthorne Heights frontman JT Woodruff said in a press release. “Blurring the lines within a strange industry and marketplace is what keeps your blood pumping after all this time.”

“A lot of people are probably going to ask, why the hell is this band covering extremely current pop songs that sound nothing like their band.  The answer is pretty simple. We tweeted at Kacey, just wondering if she had ever listened to us back in the day. And she tweeted some of our lyrics back to us,” he continued.  “We thought it was pretty bad ass that musicians in different genres are still connected. Billie Eilish was a similar scenario. She posted a video of her breakdancing to NikiFM, and thought it was super cool. Both of these are very talented artists, who represent the most current side of pop music.  Both sound nothing like what we are used to writing. We thought it was a great exercise in trying to make their happy pop songs sound like sad Emo songs.”

You can listen to both covers below.

In case you forgot, Musgraves has proved her emo past many times, including the aforementioned tweet which you can see below.

you killed me well for sure https://t.co/DCzHP5ELe2

Also, Eilish’s breakdancing to a classic Hawthorne Heights track did get a seal of approval from the band. In case you missed it, you can see the video of her dancing below.

The band was obviously a big fan of the video, and wanted to collab with Eilish if she was down, which we’d live for.

Just to be clear…we think a collab with @billieeilish would be fun. Just waiting for the invite.

Hawthorne Heights are gearing up for the special 15th-anniversary tour of their album The Silence In Black And White. You can grab tickets here and see the dates below.

What do you think of the Hawthorne Heights cover record? Sound off in the comments down below!