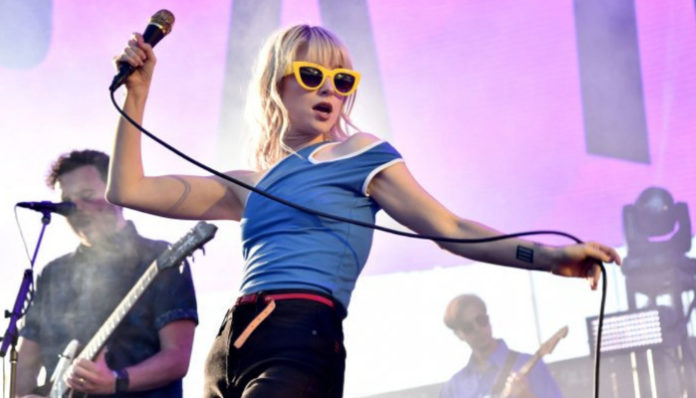 Earlier this morning, Hayley Williams weighed in on the recent controversy regarding women’s bodily autonomy on Twitter. In a tweet, the Paramore frontwoman calls upon men specifically to direct their attention to the recent changes in the government and lawmaking.

Additionally, Williams makes a comparison to the Hulu show The Handmaid’s Tale, suggesting that some plot points could become a reality if men don’t start supporting women with allyship.

“If you’re a man and you think that The Handmaid’s Tale is a well-crafted show but maybe not the best way for a modern society to operate then it’s a really good time to start speaking out against the current war on women’s bodies/minds,” Williams says in a tweet. “We need your allyship.”

if you’re a man and you think that The Handmaid’s Tale is a well-crafted show but maybe not the best way for a modern society to operate then it’s a really good time to start speaking out against the current war on women’s bodies/minds. we need your allyship.

Recently, many states have been making stricter laws surrounding the topic of abortion. For example, Georgia’s version of the Heartbeat Bill, which could go into effect as early as 2020 according to The New York Times, would ban abortions once a heartbeat could be detected. Additionally, if doctors in Georgia were to perform an abortion past the estimated six-week threshold, they could face up to 99 years in prison, according to the Washington Post.

Since the start of 2019, other states such as Ohio, Alabama, Kentucky and Mississippi have passed similar laws.

While many women have been voicing their opinions on the recent laws and ideologies, so have other members of the scene including blink-182’s Mark Hoppus, SWMRS, Sharptooth, All Time Low‘s Alex Gaskarth and Anti-Flag.

Abortion should be legal, safe, and easy to access. End of. Stop trying to tell women what to do with their bodies. Namaste. 🙏🏻

Republican men are making extremely dangerous and monsterous decisions on behalf of women. This is so fucked up. Follow, support and donate what you can. This thread is sent over by @shaaaanoooon a few of them are specific to Alabama, Mississippi and Texas

If you are angry about what is taking place in Alabama, donate to people who are doing real work to keep abortion legal and safe. yellowfund

“This awesome protestor is showing up for… https://t.co/EYTvQwJLiB

We said it before and we'll say it again.
Please vote, and get involved in politics. We need to rid our government of this awful nonsense. This kind of injustice only gets worse over time, and it's something that helps you at the end of the day.Make the difference. Be the change

Fuck the politicians who would take away a woman’s right to choose what is best for her body, her health and her well being. The efforts to regress will not stick for long.

Absolutely, yes! Apologies if my choice of wording excluded anybody. That was not my intention. https://t.co/VOFPhuQonb

What do think of Hayley Williams’ recent call to action? Sound off in the comments below.