We’ve never been so excited to hear a mute song.

It has been a little more than two years since Paramore unleashed After Laughter on the world. Since then, fans have been eager to hear any hint of new music featuring Hayley Williams and her powerhouse vocals.

The singer may have possibly delivered, but we can’t be sure. And it’s not because we don’t recognize the melody or the lyrics. Whatever it is that she posted is straight-up muted.

Yesterday, Williams took to Twitter to announce she was embarking on another social media hiatus.

“Time to get off the internet for a bit again!” she wrote in a tweet. “So looking forward to disconnecting after workin’ my ass off lately. Hope you doin’ whatever it is you need to do to take care of you. Thanks ppl for always showing love to me and Paramore. Will miss the memes! See ya when I see ya!”

However, minutes prior, the vocalist shared three posts. The first was a black-and-white image of herself with her guitar and dogs. She tagged Joey Howard who is the touring bassist for both Paramore and drummer Zac Farro’s other project HalfNoise. The caption reads, “lovely things you dont.”

The next post included a short clip of herself strumming an acoustic guitar. With it, she wrote, “and all the lonely.” This, of course, is muted as previously mentioned.

Shortly after the video (and just prior to announcing the hiatus), Williams shared the final post: An After Laughter era image snapped by drummer Zac Farro. With it, she wrote, “what you see.”

what you see photo by @zacfarro

Fans immediately freaked out about Williams sharing the muted clips.

Hayley Williams just posted a video of her playing guitar and singing without sound on ig. The audacity

When Hayley Williams posts a video singing on Instagram with NO SOUND. pic.twitter.com/Bjz49JdSEY

Others assumed the cryptic post must mean new music is on the way. 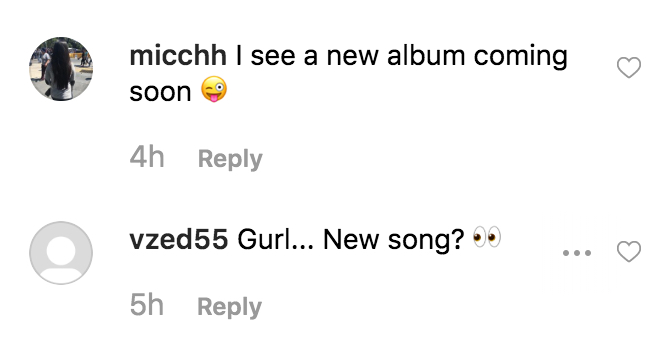 If this is a potential new track, then it doesn’t come as a total surprise. While Williams has publicly devoted much of her time to her hair dye brand Good Dye Young, she opened up about the need for self-care and putting her attention towards that and privately towards music.

“It’s holiday season, but I’m working a lot from home, mostly on my side project Good Dye Young, which for the time being, is actually my main bitch,” Williams wrote in the post announcing her first social media break. “There’s…a lot…going on. It’s exciting and it’s also a lot.

Read more: Musicians who could double as the ‘Batman’ cast, from Hayley Williams to YUNGBLUD

“For the hell of it, I’ll tell ya that life is still plenty musical right now, and it’s cool to make things for no one else to hear. I’m not planning on abandoning music for hair, in case anyone’s starting to wonder.”

Paramore haven’t played a show since September 2018. The band headlined their inaugural Art + Friends in their hometown of Nashville, signaling the end of the After Laughter album cycle. There, Williams made the announcement that the band decided to retire the lyrically controversial “Misery Business.”

“Tonight we’re playing this song for the last time for a really long time,” Williams says from the stage. “This is a choice we made because we feel like we should. We feel like it’s time to move away from it for a little while.”

She also asked fans to send it off with all the energy and love they could muster. You can see fan-shot footage of Williams’ making the announcement below.

While the September show marked the band’s last show together to date, Williams has joined various acts including Kacey Musgraves for an epic “Girls Just Wanna Have Fun” cover.

Most recently, Williams joined Farro’s HalfNoise at Bonnaroo where she was curating her Sanctuary Of Self Love. The singer traded in the mic for a tambourine and some dance moves.

What do you think Hayley Williams’ cryptic posts mean? Let us know in the comments below!