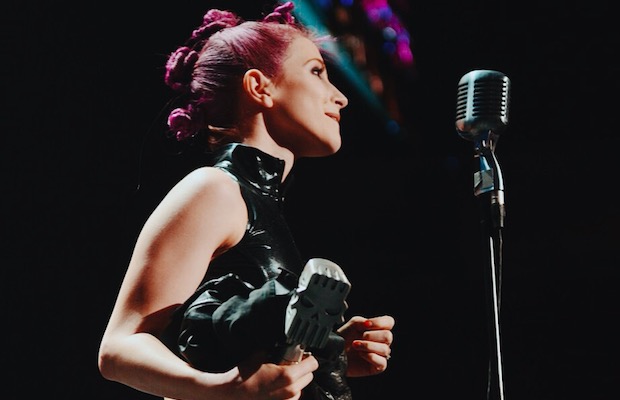 Earlier today, PVRIS officially debuted their first new song since 2014’s White Noise. The monumental track, titled “You And I,” was accompanied by an awe-inspiring video and the announcement of White Noise’s deluxe edition. [Photo credit: Grizzlee Martin]

Read more: Hayley Williams on being a feminist: “‘Misery Business’ is not a set of lyrics that I relate to”

Since the song went live, the band have been receiving congratulatory nods from fellow musicians, including Paramore frontwoman Hayley Williams. “You’re an absolute badass,” wrote Williams in a tweet sent directly to Lynn Gunn, “and your band sounds better than ever. Love the new video.” Check it out below.

Last summer at the second annual APMAs, Gunn met Williams. “I won’t lie, I’m a very big Paramore fan, and I met Hayley and she said some very nice things and we had a nice little talk. That was definitely the highlight.”

Williams added, “It was really cool to see Lynn Gunn. I love that [PVRIS are] killing Warped Tour right now. I'm watching from afar a little bit. It's nice that there's another girl that sings really strongly over guitars, and it's really translating from stage well. I was—oh my God, I almost said I was ‘gunning' for her, and then I realized her last name is Gunn. That was so cheesy!”

@LYNNGVNN you're an absolute bad ass and your band sounds better than ever. love the new video.