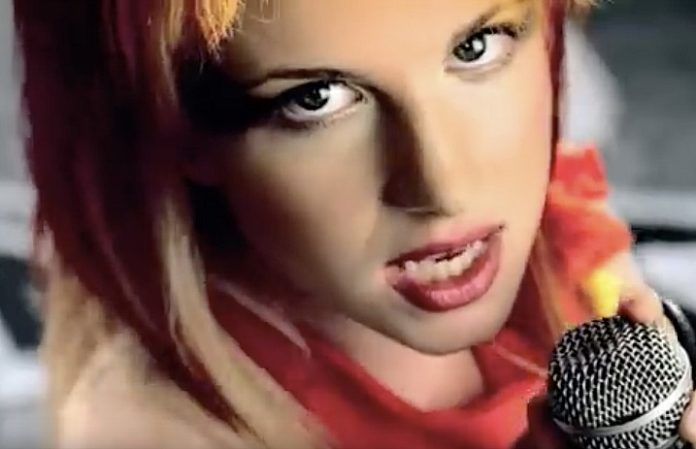 Paramore frontwoman Hayley Williams was only 17 years old when she wrote the line “Once a whore, you’re nothing more/I’m sorry, that will never change.” But now, 11 years later, Williams explains the lyric along with her decision not to sing it now – for about the 100th time.

Check out what she said this time below.

In an interview with Track 7, Williams explains how much things have changed since Riot! came out 10 years ago.

“I have a distinct memory – in fact, somewhere there’s a video – of all of us, Taylor too, hanging out at the park. It was springtime, 2007, and we were literally playing in a field together. How much more innocent can you get? In many ways, it was the last uncomplicated season for us as friends.”

It was the band's second album and was how a lot of fans came across the group as it peaked at No. 15 on the Billboard 200. In fact, AP even predicted the future in our review for Riot! writing “they are definitely poised to be the next big breakout band from the label.”

Now Paramore has recently released their fifth album After Laughter, and they won their first Grammy in 2015. Yet, the topic of that one lyric from 10 years ago continues to come up interviews. On the anniversary of the video's release date, Williams referred to the song as a “backward-minded lil rascal” but also wrote about how people can change from within.

“The thing that annoyed me was that I had already done so much soul-searching about it, years before anyone else had decided there was an issue,” Williams says. “When the article began circulating, I sort of had to go and rehash everything in front of everybody. It was important, however, for me to show humility in that moment. I was a 17 year old kid when I wrote the lyrics in question and if I can somehow exemplify what it means to grow up, get information, and become any shade of ‘woke’, then that’s a-okay with me.”

But this is far from the first time Williams has talked about the lyric. In a blog post in 2015, Williams writes: “Misery Business is not a set of lyrics that I relate to as a 26-year-old woman. I haven’t related to it in a very long time. those words were written when I was 17… admittedly, from a very narrow-minded perspective. It wasn’t really meant to be this big philosophical statement about anything. It was quite literally a page in my diary about a singular moment I experienced as a high schooler.”

And yesterday, she pointed out that the controversy behind the song happened years ago:

for the record, folks- this whole miz biz conversation was yrs ago. literally. tired of sensationalism around what's “good”/”bad” feminism.

In fact, listening to the original song might be the only way you hear those lyrics anymore, as Track 7 reported that Williams skipped the line when Paramore performed the song at the Royal Albert Hall in London.

So while Misery Business will always be an amazing single, let's enjoy the entire song instead of focusing on that one particular line. And while we're at it, let's avoid asking Hayley about this, too:

The band recently celebrated the 12th anniversary of All We Know Is Falling, the band’s first record that holds a special place in our hearts. And in honor of the anniversary, the band's Twitter account shared some seriously nostalgic photos, which you can check out here. The band are currently on tour in support of their most recent album, After Laughter, released back in May; check out their fall tour dates here. Not to mention that their music video for “Hard Times” is one of our fave music videos of the year (so far); give it a watch now.

Hopefully the 100th time is the charm and Hayley won't have to talk about how she's moved on from writing a lyric that she wrote when she was 17 years old.