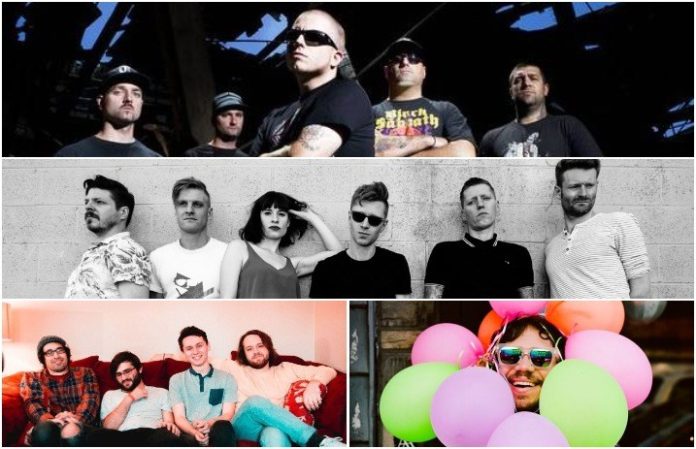 Don’t miss new music from Hot Mulligan and HARM—plus, you can catch Hundredth at SXSW. Check out the news you might have missed today below!

1. Hatebreed, the Acacia Strain, Knocked Loose and more were announced for the Heartland Throwdown festival

UPDATE FOR MARCH 22ND: @hatebreed and @knockedloose have merged. Check the flyer and let's have some fun.

All tix purchase prior to this announcement will be honored at the door. Shout out to @MammothLive for working with us.

In case you missed Knocked Loose or Hatebreed’s headlining tours, fear not! These two massive tours are colliding in one pretty jam-packed night. The one-day event, the Heartland Throwdown festival, will feature every band from each tour respectively. It will be taking place at the Sokol Auditorium + Underground in Omaha, Nebraska, Thursday, March 22. You can get your tickets here!

2. Hot Mulligan premiered their new song “The Soundtrack To Missing A Slam Dunk”

Hot Mulligan have premiered their latest song, “The Soundtrack To Missing A Slam Dunk,” via Substream Magazine! The track is taken from the band's upcoming album, Pilot. The album will be available March 23 via No Sleep Records. You can get your copy here. Plus, the band will be heading out on tour with Knuckle Puck, Boston Manor, Free Throw and Jetty Bones. Pick up tickets here!

3. HARM announced a new EP and released a new single

HARM, a post-hardcore band from North Carolina, have announced their new EP, What We Know Is A Drop. The album will be released March 2, and you can watch the band's newest video for “She Knows Who She Is, She Just Forgot For A Little While” above. The band will also be going on a small EP release tour, and you can check out the dates below:

We will be at this years @SXSW. playing a showcase March 13.

Hundredth announced that they will be playing at this year's SXSW! The event will be held March 9 through the 18th, and you can check out the band when they perform March 13.

5. Between You & Me shared a studio update

Australian pop punkers Between You & Me have shared a studio update, and we can't wait to hear more! Until that time comes, you can listen to their latest song “Overthinking” here.

“Melba” is taken from the musician's latest album, POST-, which you can stream and/or buy here! Be sure to check out Jeff Rosenstock on tour—you can see the dates and buy tickets here!

The London-based rockers in Skinny Lister have premiered a politically-charged new track, “Thing Like That.” The song is taken from the band's recently released album The Devil, The Heart & The Fight. You can get your copy of the album here! The band will also be embarking on a U.S. headlining tour with Will Varley. For dates and tickets to the shows, you can go here!

New York rockers Council have released their latest music video for “Rust To Gold.” The song was featured in the 2018 Winter Olympics, and you can stream and/or buy the song, with two additional songs, here!