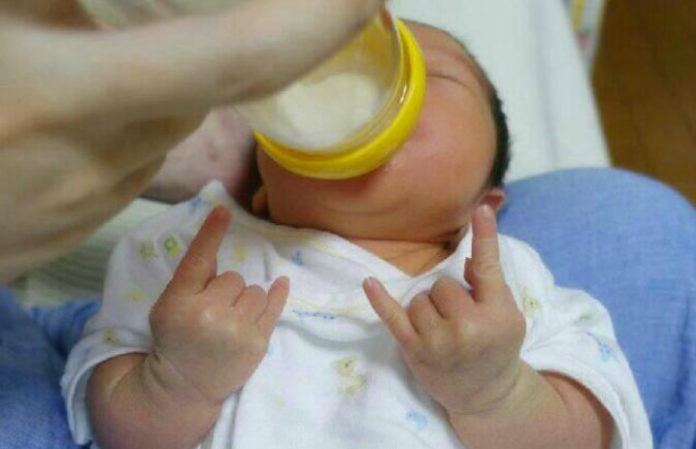 Metal vocalists are some of the coolest people on Earth for a variety of reasons, but one of the main reasons has to be how we're simply amazed that night after night they can produce seeminly unhuman sounds without ever damaging their throats. But how do they do it? Inside Science explained and we're still blown away.

Check out the complete video below!

Read more: This couple’s ultrasound shows their baby putting up the horns

So it turns out that metal vocalists and babies have a lot more in common than anyone thought. Krzysztof Izdebski explains that babies only know a few different sounds including “sounds of scream and growl, and inhalation and high pitch and whistle and low pitch.” Sound familiar? Unfortunately, most of us end up losing the abilities to make these sounds but metal vocalists don't.

Izdebski has a super cool high-tech camera that can record someone's throat while they sing or growl or scream up to 16,000 frames a second which basically means it's going in super slow-mo. Video from this camera showed Izdebski something that explained why these vocalists can make these crazy noises without any damage.

“So a growl is, is one of the most aggressive sounds that heavy metalers do; it sounds something like 'Rahhhh!!!' Okay. So, a growl is produced — and they can do it over and over and over, hour after hour … The images that we recorded clearly show that it’s produced predominately, predominately by structures above the glottis. So, the vocal folds do open and vibrate but actually don’t collide, and the entire sick area above — aryepiglottic folds, arachnoids, epiglottis — everything claps and dances, basically, and creates vibrations and creates acoustic orchestration,” said Izdebski.

So when most of us raise our voice, our vocal cords collide causing our voices to strain and a nasty sore throat, but when metal vocalists make these loud growling noises, their vocal cords never actually touch. Even cooler is that this research caused Izdebski to be a heavy metal fan!

“And these guys do, they do produce really very specific tasks and very specific melodies that are then supported by instruments. And it’s not just kind of going on stage and screaming and doing sort of random stuff. They really compose this stuff.”

Check out the complete video explaining the science better than we ever could below!