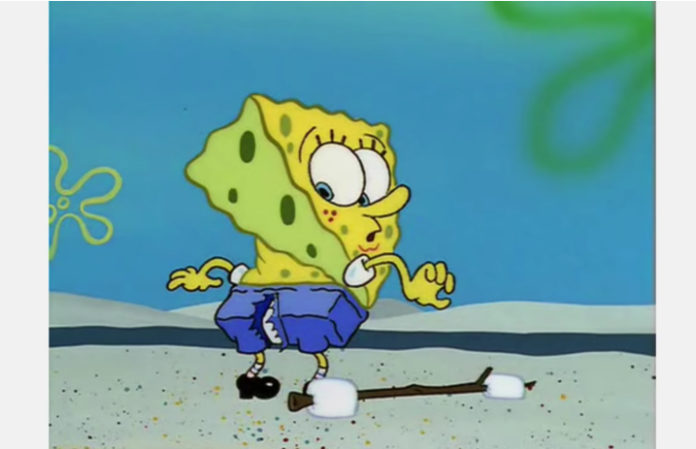 Yep, you read that right: SpongeBob SquarePants might have some more depth than meets the eye.

The yellow sponge ties in a ton of underlying messages as YouTuber Quinton, from the channel Quinton Reviews, explains—with an interesting one regarding the rise in meme culture in the episode “Ripped Pants.”

Read more: This EDM musician proved that mayonnaise actually can be an instrument

As we all know, while SpongeBob does his best to impress Sandy, he leans over—and rips his pants. After that incident, he becomes a hilarious sensation. Sound familiar?

That’s where Quinton sees the connection to meme culture start:

“The first wave is where people laugh at the viral clip or image on its own standalone basis.”

“The second wave is where people reappropriate the humor in some new context.”

“The third wave comes when the joke is recognizable enough that the punch line is a reference to the original joke itself.”

“After that, the humor will continuously devolve further and further until it eventually ends up on the Ellen show.”

Basically, people can’t avoid taking part in the craze—but that joke gets less funny as more and more people use it. The joke typically regards a specific event that only a few people know about until everyone knows about it, and once everyone knows about it, they soon hate it. The residents of Bikini Bottom sure predicted that with their annoyance of SpongeBob’s continuous ripping of his pants.

“It’s like trying to watch a one-hit wonder try to write their second song,” Quinton explains.

And there's one way to stay relevant—by creating something relevant that proves you have actual talent.

“Obviously, SpongeBob does win the people back in the end, but not by apologizing or trying to make his own joke work again, but by doing something he loves in a way that no one else can. He manages to prove that he has a talent outside telling the same joke over and over again.”

By making a song, SpongeBob proves that he has more to offer than a split second of fame—he has something he’s put actual work and thought into, and that’s what people will remember. Does that mean “Damn Daniel” and “Salt Bae” should write a song or two?

Maybe. Because as Quinton says, “Be true to yourself. Don’t miss your chance. And you won’t end up like the fool who ripped his pants.”

Watch the video below to hear more of his analysis:

What do you think of Quinton's theory? Let us know in the comments below!