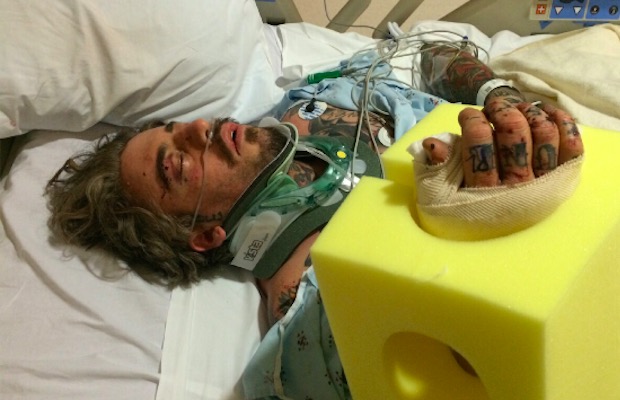 Joel “Falcon” Bourne, drummer for industry groups such as Day Of Contempt, The Dear & Departed and Tiger Army, was struck by a car while riding his motorcycle on Tuesday, January 13. He suffered initial memory loss, which left him not being able to recognize people, including his five-month pregnant wife. Other complications included subdural hematoma, a shattered femur, a broken foot, multiple compound fractures, a dislocated wrist and, among other things, permanent loss of feeling and movement in his right arm and hand.

Since the accident, Bourne has undergone two surgeries to replace the bones in his arm and leg with steel rods. His now in residing in a nursing home to begin his rehabilitation process. Due to the seriousness of his injuries and the time it will take him to recover, he will not be able to work, leaving his four-year-old daughter and pregnant wife, Crystal, and with significant financial hardship.

A fundraiser has been launched in an attempt to help ease the monetary stress that Bourne's family is currently under.