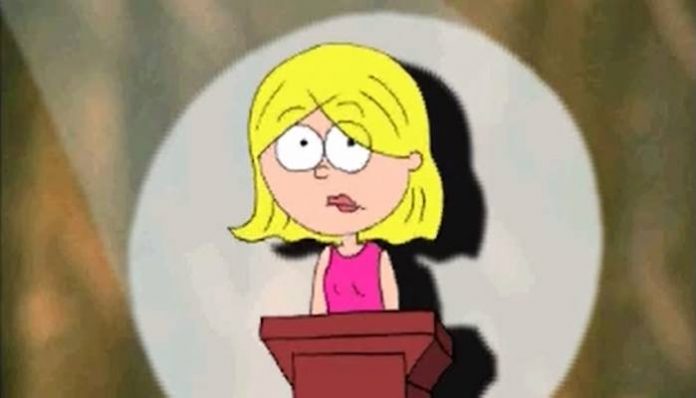 Adults everywhere lost it when news broke that Hilary Duff would be reprising her role as Lizzie McGuire for a Disney+ reboot. First rumored at the end of last year, the reboot plans were confirmed at D23 Expo in August.

The original run of Lizzie McGuire followed the titular character throughout her teen years, expressing her real thoughts and emotions through an animated alter ego. While we know Duff will be returning alongside her original casted family, not much else was revealed about that animated alter ego until now.

This week, Duff opened up about returning to the role with Entertainment Tonight, explaining part of the perks is delving into the same challenges she experiences in real-life. “That was part of the draw for me for coming back was the struggles that I feel as a 30-year-old,” Duff says.

“She has gained a lot of confidence and she has a really cool career,” Duff continued. “She’s still going to be faced with challenging things, where, in middle school, those challenging things seemed simple and funny but relatable at the time. Now, in your 30s, it’s gonna be the same way but slightly heavier. [She’ll have] slightly bigger things to deal with.”

“I think it’s really gonna be fun to go on the journey with her at 30,” Duff added. “It’s the same Lizzie, but as an adult.”

Read more: Billie Eilish has no idea who Hilary Duff is after getting ‘Lizzie McGuire’ gift

While Duff will be giving us a look into the world of McGuire in her 30s, one thing that will not be changing is the animated alter ego.

“She’s gonna stay the same,” Duff says. “She has an epic return and I am so excited. She’s really gonna be a lot of the comic relief in the show.”

The series premiered Jan. 21, 2001. It ran for two seasons, consisting of 65 episodes, before ending in 2004. The series was also adapted into a full-length feature film, The Lizzie McGuire Movie, in 2003. No release date has been set for the forthcoming reboot, but Disney+ launches Nov. 12 here.

In December, Duff revealed there have indeed been discussions about reviving the Disney show. “There’s been some conversations,” Duff told Entertainment Tonight. “It’s definitely not a go. I don’t want to get everyone wild talking about it.”

However, she also revealed she would love to reprise the role.

“I mean I love her so much,” she says. “I think she was so important to girls at an important time in their life. If she could be important to them again at this age, I think that would be amazing.”

Duff wouldn’t reveal where she thinks Lizzie would be in her life today, but she did say it’s been discussed. “There’s been lots of conversations about that,” she states. “I’m racking my brain. I don’t think she’s a mom yet, but she might be getting there soon.”

Following that speculation, the series reboot was confirmed at D23. Obviously just as excited as us, Duff has been sharing teasers across her Instagram feed.

“SURPRISE!!! I’ve been trying to contain this excitement for a loooong time while this has been in the works!” Duff shared after the D23 reveal. “I am beyond excited to be home again, back with my girl ♥️…and into her 30’s”

SURPRISE!!! I’ve been trying to contain this excitement for a loooong time while this has been in the works! I am beyond excited to be home again, back with my girl ♥️…and into her 30’s #bringbackbutterflyclips #lizziemcguire #thisiswhatdreamsaremadeof #lizzieforpresident #DisneyPlus #D23Expo . . . . . . Also, If you needed yet another reason to get Disney+ ….the #lizziemcguiremovie will be living there!

In October, Duff confirmed her original family would also be reprising their roles. Robert Carradine and Hallie Todd are returning to portray her parents while younger brother Matt will still be portrayed by Jake Thomas.

“We are standing in what will soon be the McGuire living room. What’s up fam. We doin this #lizziemcguire #disneyplus”

🤯 we are standing in what will soon be the McGuire living room. What’s up fam. We doin this #lizziemcguire #disneyplus

Alpaca your bags! #LizzieMcGuire, an original series coming soon to Disney+, is heading to the Big Apple for the next chapter in Lizzie’s story. Check out this exclusive photo from the first day of production.

Are you excited for the Lizzie McGuire Disney+ reboot? Let us know in the comments below.