This new ‘Hocus Pocus’ mug comes with its own broomstick spoon

The mug is available at ShopDisney.

Disney is expanding its Hocus Pocus line just in time for the spooky season.

The company recently released a cauldron shaped mug that even comes with its own broomstick stirring spoon. The latest item from the film franchise is perfect for those cold autumn nights.

Various companies including Disney are getting ready for Halloween 2020 early. Target recently debuted a massive collection of Halloween decorations that are already selling out. Funko also hopped on the Hocus Pocus bandwagon and expanded its collection with a brand new Pop! figure. As well, Funko just unveiled the highly-requested Nightmare Before Christmas Advent calendar.

Now, Disney is continuing to spread Halloween joy early this year. A new coffee mug has been released that is heavily inspired by the film’s main character Max Dennison.

Reminiscent of the tie-dye shirt he wore at the start of the movie, the new mug features rainbow colors and an iridescent finish. The mug also includes one of Dennison’s most iconic lines, “it’s just a bunch of hocus pocus.”

The mug is in the shape of a witch’s cauldron and even comes with its own ceramic stirring spoon that looks like a wooden broomstick. Now, you can stir up a potion of your own or maybe a holiday drink or two this year.

The Hocus Pocus mug is available for $19.00 at ShopDisney and will likely be one of Disney’s most popular items this year. 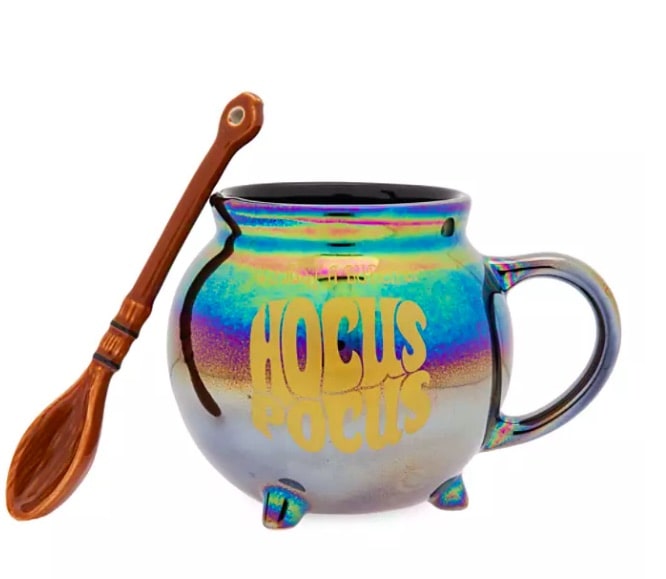 Due to coronavirus, California’s Disneyland remains closed. However, the Downtown Disney District has begun a phased reopening. Meanwhile, all of Disney’s Florida parks are now open with various health and safety restrictions in place. Magic Kingdom, Animal Kingdom, Epcot and Hollywood Studios all reopened on schedule this summer.

It was also recently announced that this year’s Not-So-Scary-Halloween Party at Disney World is canceled this year.

Disney has been unveiling various new items for the Halloween season. Last week, a Nightmare Before Christmas holiday stocking began appearing in shops. The burlap stocking is in the shape of Oogie Boogie and is perfect for Christmas stocking stuffers or for trick-or-treating.

What do you think of the Hocus Pocus mug from Disney? Let us know your thoughts in the comments below.